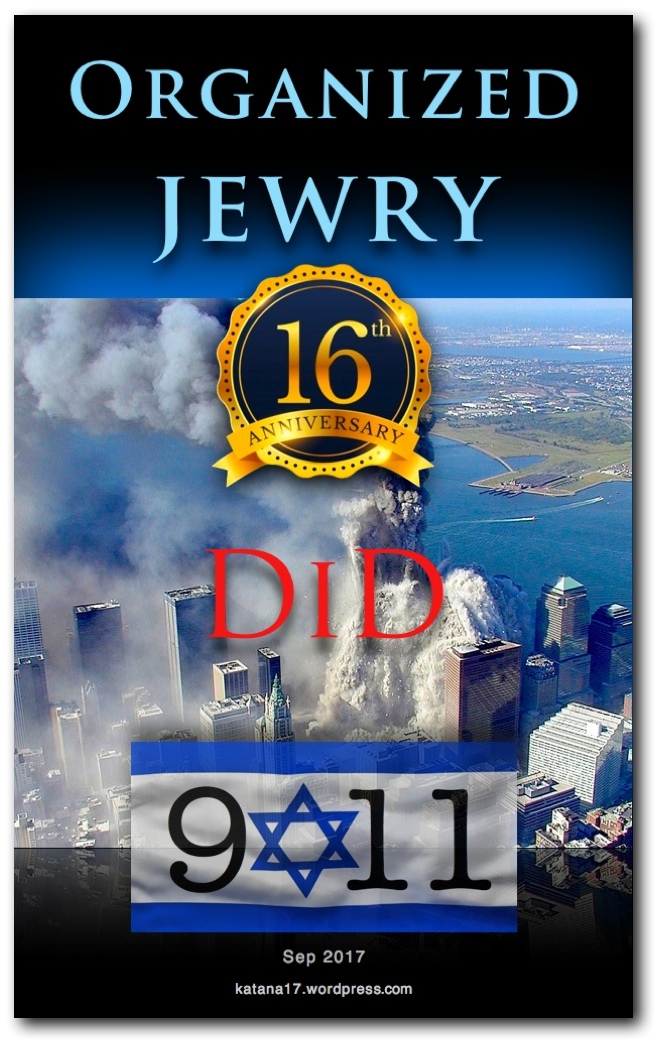 [NOTE: This is a re-post of what I wrote one year ago. I will add updated material here, later.

Three building (WTC 1, WTC2 and WTC7) on 9/11 were destroyed by controlled demolition. Over 2,900 architects and engineers have come to that conclusion. Just look at the pictures below. The only people capable of doing that and many other necessary steps were (((insiders))), not 19 Arabs. Any Arabs present were mere diversionary patsies in this massive crime, that has since killed millions, carried out by organized jewry for the purpose of creating, via a War OF Terror,  a Jew World Order — KATANA]

When any crime is committed the most important thing is obviously to find out who did it. How the crime was committed and why it was committed are usually secondary issues unless those aspects are critical in determining who did the crime.

The official story that these three buildings were destroyed by the consequences of aircraft hitting two of the buildings is childish for anyone not mesmerized by “authority figure” pronouncements.

It should be obvious to anyone with average intelligence and commonsense that the buildings were brought down by some form of controlled demolition. Look at the pictures and look at the videos. There are also over 2,900 architects and engineers who have stepped forward and risked their careers and reputations by defying the official story and going public in supporting this commonsense view.

Once you understand that some form of controlled demolition was carried out on the twin towers on 9/11, then that is basically all you really need to know about the events of that day. The reason I say that is because the ONLY group of people capable of carrying out a controlled demolition of those buildings and subsequently covering up that crime, MUST be a group that is IN CONTROL of the US government and the media.

Any honest and informed person of politics will of course understand that the US government is, behind the scenes, fully controlled by ORGANIZED JEWRY. The politicians on both sides are mere puppets taking turns to do the bidding of organized jewry and those non-jews (shabbos goys) that have been co-opted.

Now, there are several other roads one can take about 9/11 that will lead to the same conclusion.

But the “controlled demolition road” is very simple and obvious, so I would recommend that.

All we essentially need to know about 9/11 is that the buildings were brought down by controlled demolition, and that the only group capable of carrying out that, and the subsequent cover-up, has to be in control of the US government: in other words, ORGANIZED JEWRY!

Why did ORGANIZED JEWRY carry out 9/11?

It was to create the pretext, a new “Pearl Harbor” in their words, to launch The War OF Terror against the rest of the world, starting with the Middle East, but eventually expanding to include anyone or any entity that opposes the establishment of a world tyranny known as the Jew World Order.

Case closed, as they say. 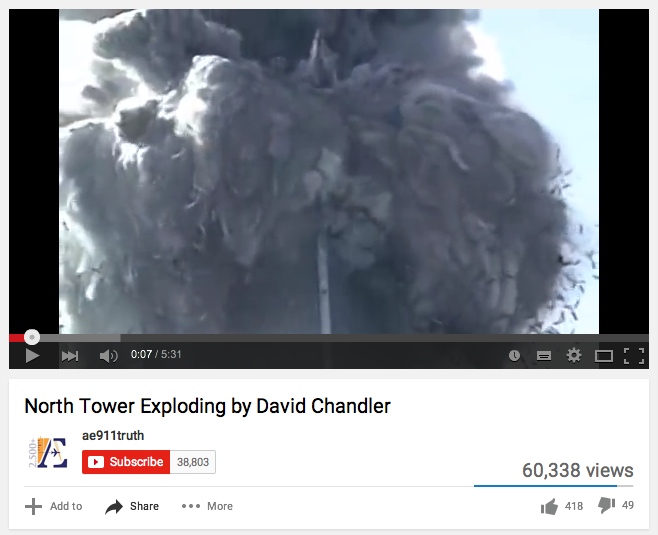 Watch this short (5 minute) video by physics teacher David Chandler. He gives a detailed exploration of the North Tower (WTC 1) being blown to bits in an unconventional (top down) controlled demolition.

Chandler: The starting point in science is observation. What you are seeing here is what happened to the North Tower of the World Trade Center, the second of three buildings to collapse on 9/11/2001.

I use the word collapse, but words can be deceptive. What do you really see happening here? There’s a tremendous amount of falling debris, but under the canopy of debris, do you see the rapid sequence of explosive ejections of material? Some of the jets have been clocked at over 100 miles per hour [161 kph]. I will call them explosions, because it’s hard to find other words that describe what we are seeing here. The explosions are not isolated or few. In fact, they are continuous and widespread. They move progressively down the faces of the building, keeping pace with the falling debris.

Perhaps you can imagine a natural cause? I can’t notice that the explosions are occurring on multiple floors at once, over a wide zone, not in a floor-by-floor sequence, that might be explained by pancaking collapse. Notice there are explosions far below the point of collapse. Some are isolated and focused. These are often referred to as “squibs” and are commonly seen in controlled demolitions.

Notice that embedded in the dust clouds are huge girders and entire sections of steel framing that are being hurled out of the building. The horizontal speed of some of the girders has been clocked at over 70 miles per hour [112 kph]. Some of these girders impale themselves in the sides of neighboring buildings. Some landed as much as two football fields away from the base of the tower.

What could hurl heavy girders with such force and give them such speed? Some people have suggested that the weight of the tower crushing down on the girders cause them to flex and they sprung sideways by a spring action. But we are not seeing isolated jumping girders we are seeing a major fraction of the mass of the building, steel, concrete, office furniture, and the remains of human beings, reduced to small pieces of rubble and fine dust and being explosively ejected in all directions.

Bone fragments are found on the roofs of adjacent buildings. The bones were not crushed in the falling mass, or they would have been trapped in the debris pile, they were pulverized along with everything else and blown out in all directions.

It does not appear that the building is being crushed by anything. The waves of destruction and explosive ejections of material are occurring over a wide zone that continues all the way to the top of what remains of the building.

The scientists at NIST did not model the collapse of the towers. Their analysis was gravely flawed in many ways, but the biggest flaw was that the scope of their investigation was artificially limited. They took their analysis only to the point of initiation of collapse, as though all that followed was inevitable and needed no explanation.

The scope of their investigation was artificially limited to what might have happened, or could have happened to begin the collapse. What they explicitly did not take into account is what actually happened. By limiting their investigation to the natural precursors of collapse, plane damage in the fire. They ruled out from the start any possibility of discovering evidence of planned demolition. In other words, anything that occurred during the collapse itself, such as the evidence you are seeing here, was explicitly scripted out of the investigation.

Any analytical model of the collapse, no matter how simple, or how sophisticated, is a bad model and bad science if it does not come back full circle to explain the actual observations.

What do you see? 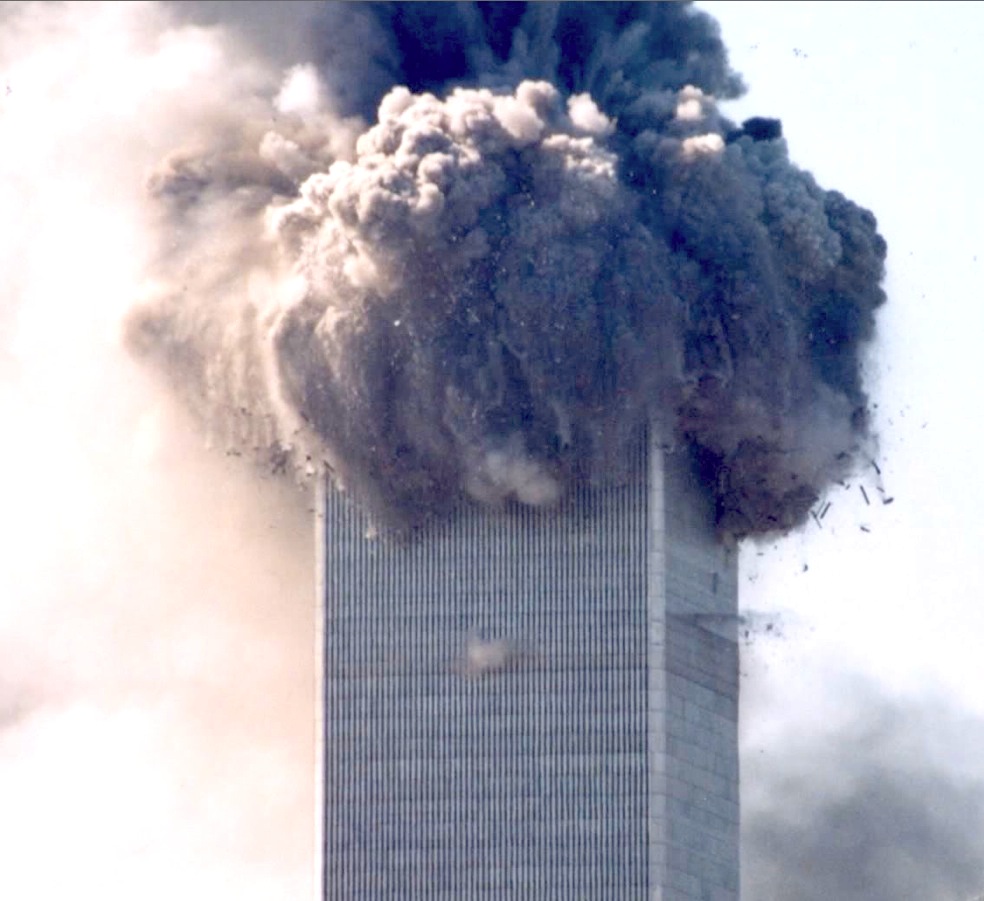 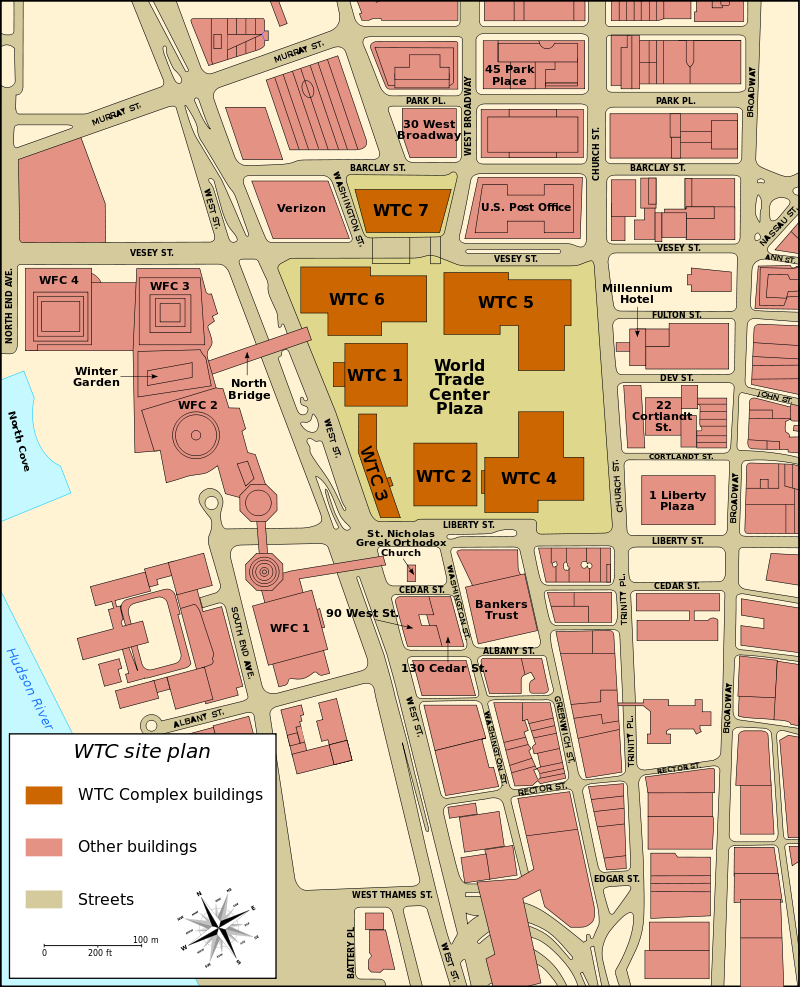 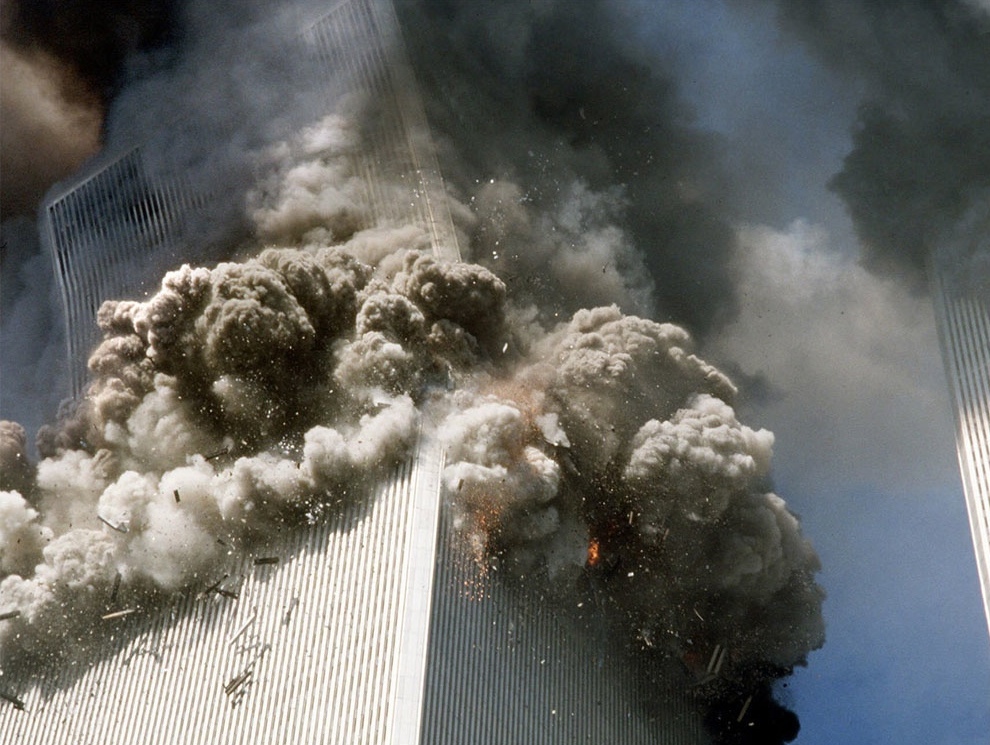 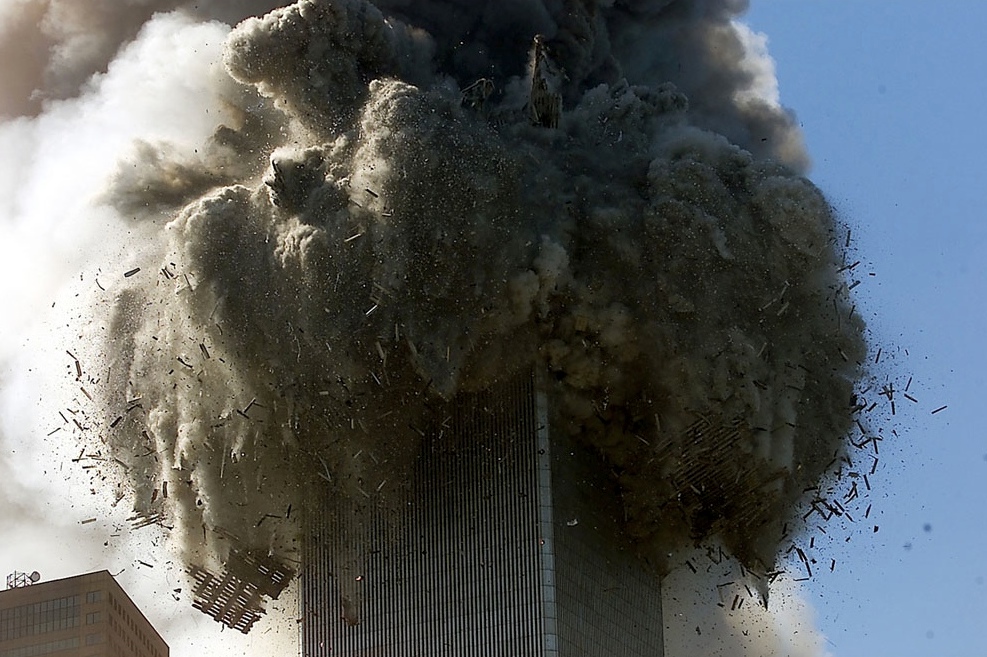 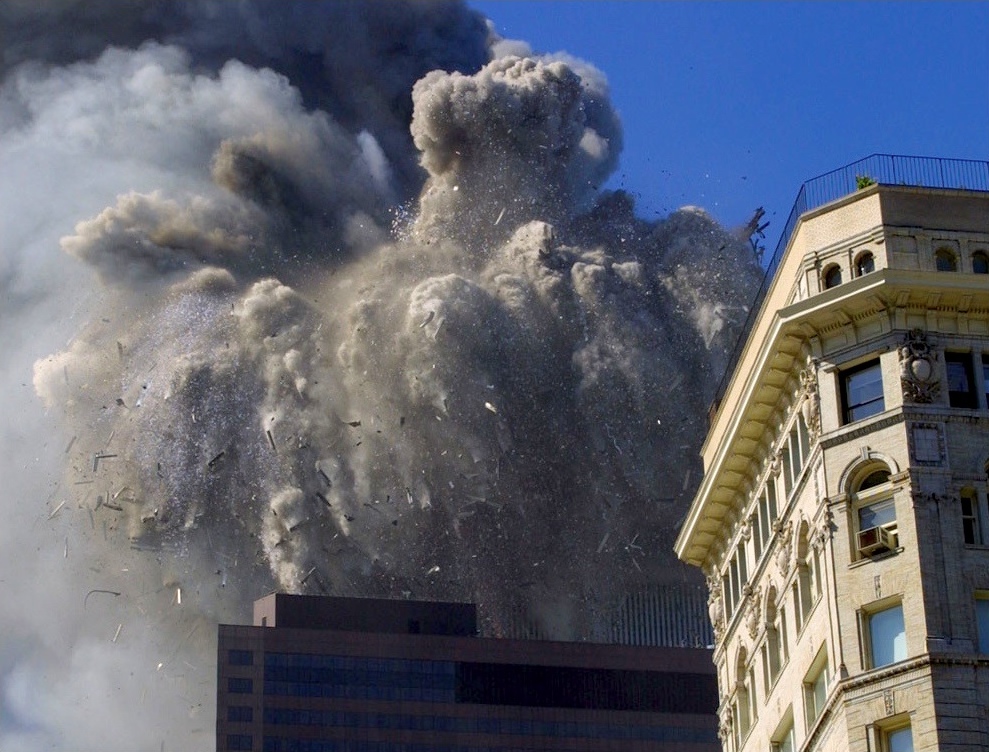 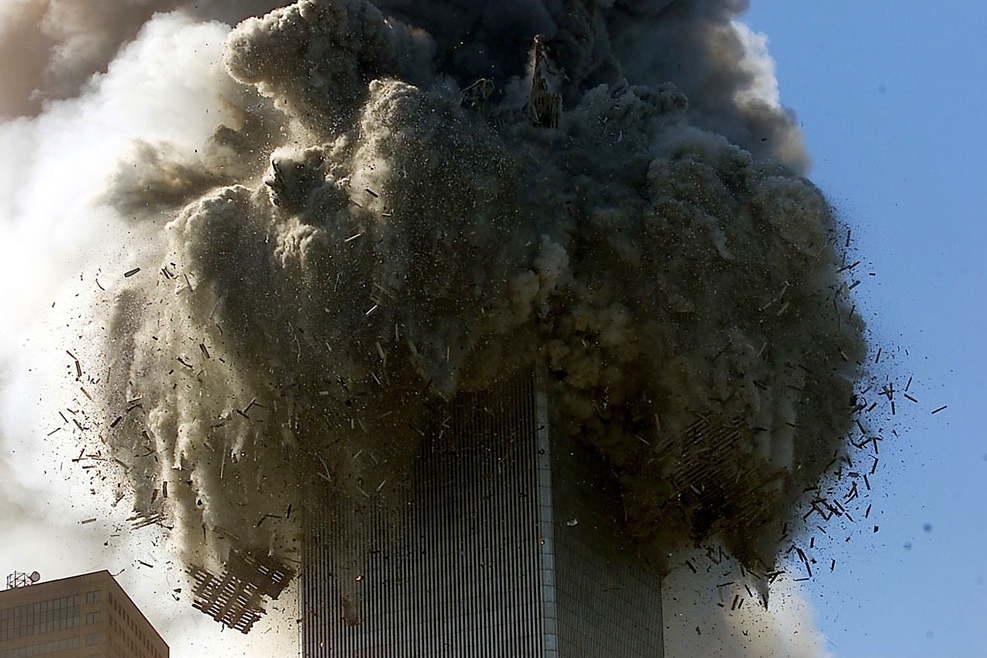 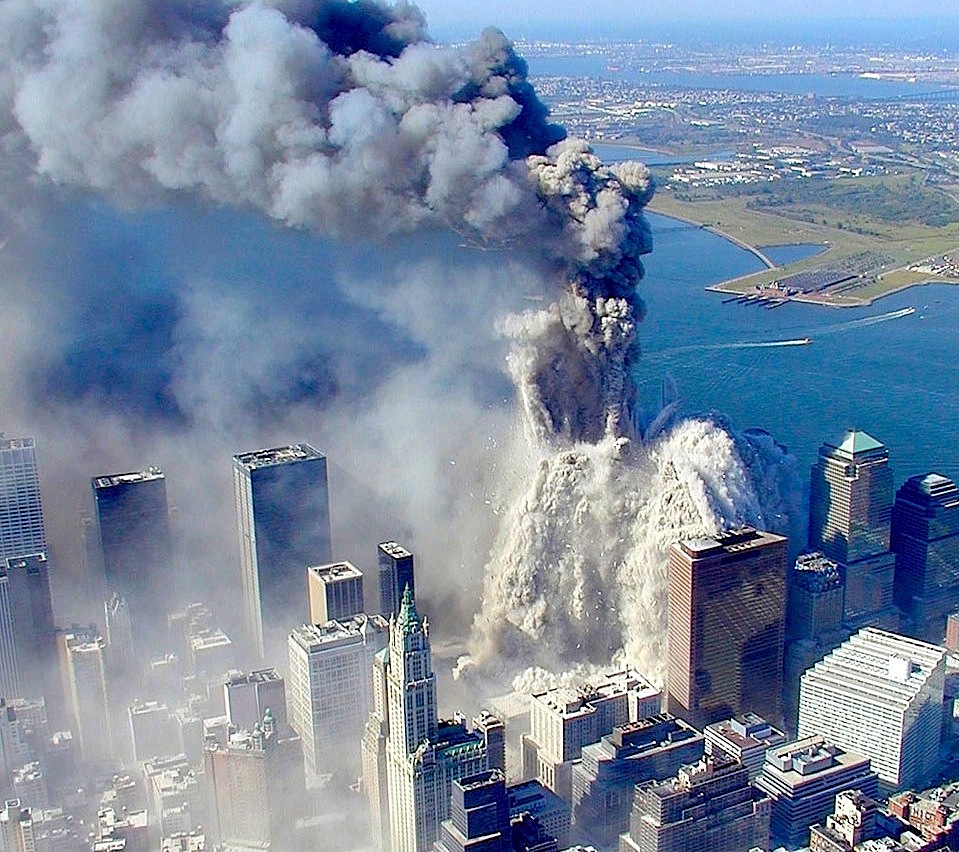 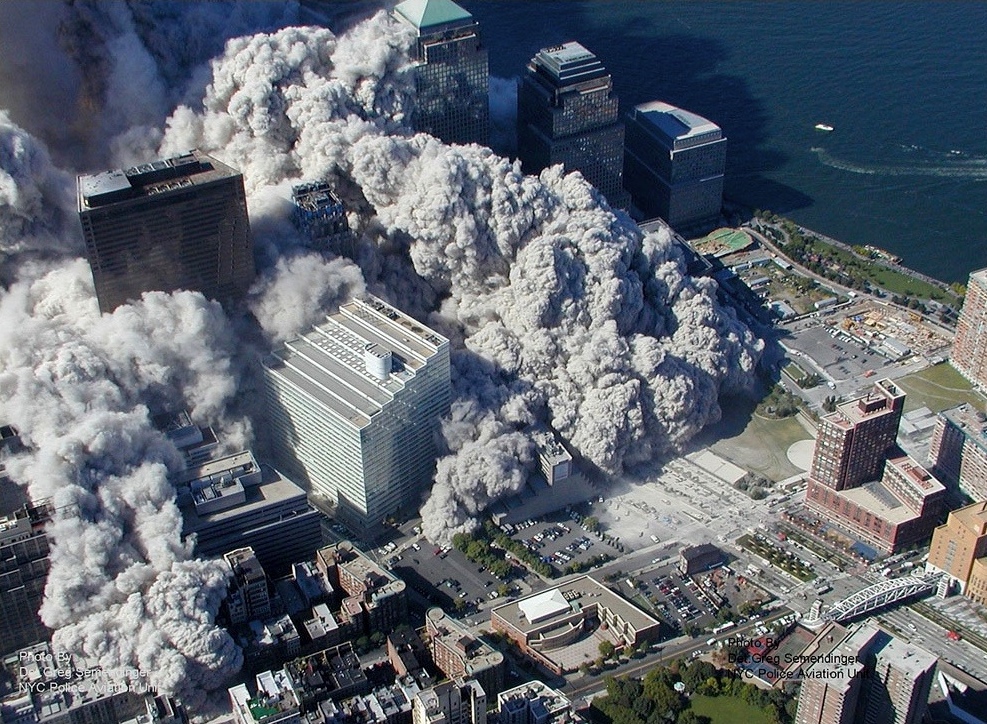 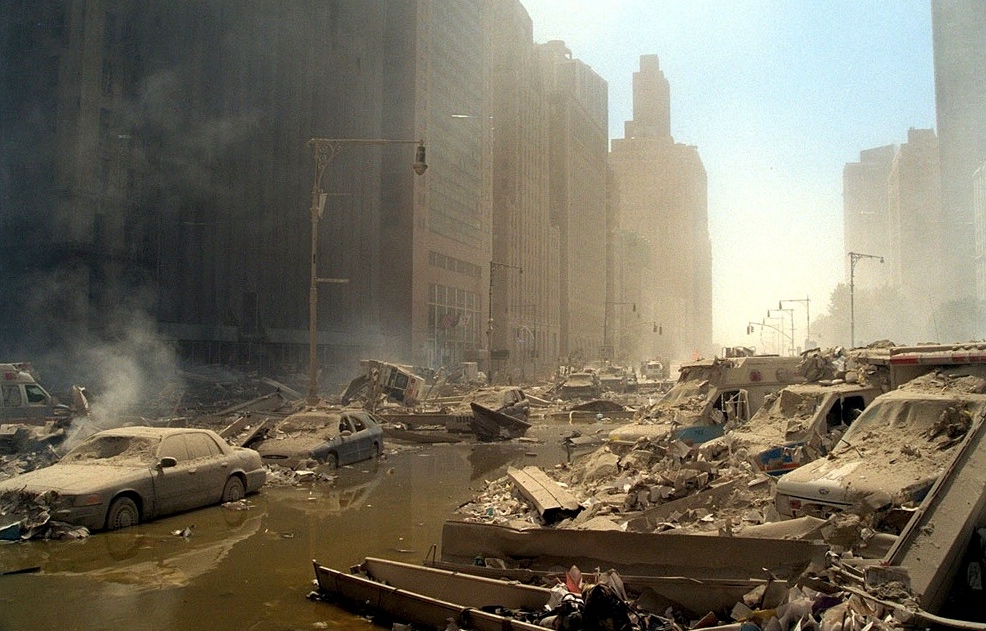 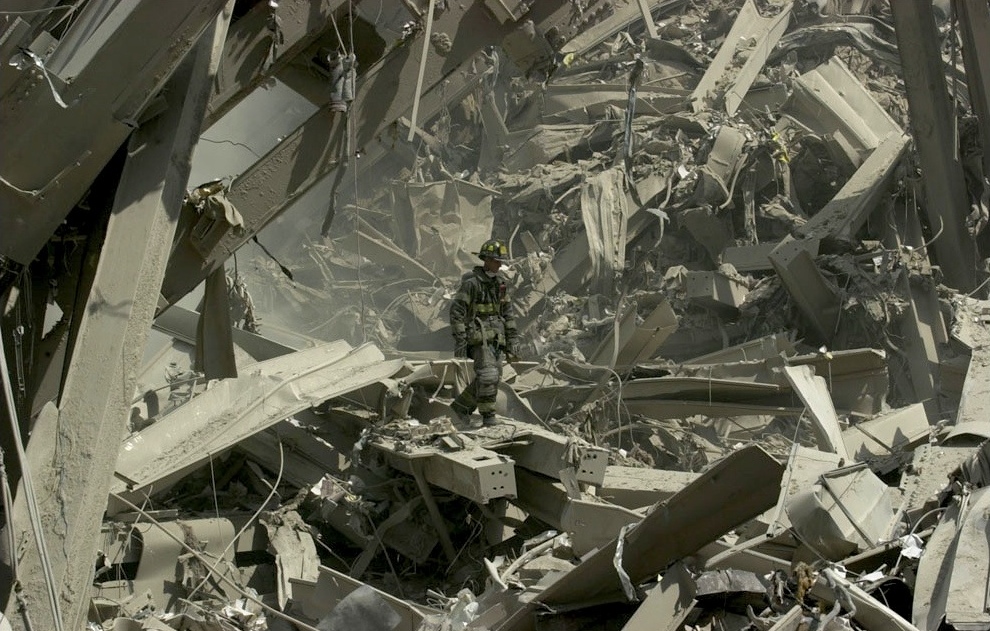 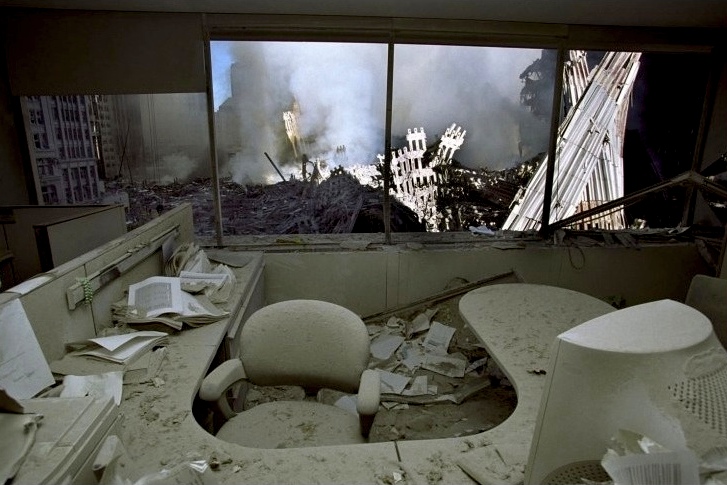 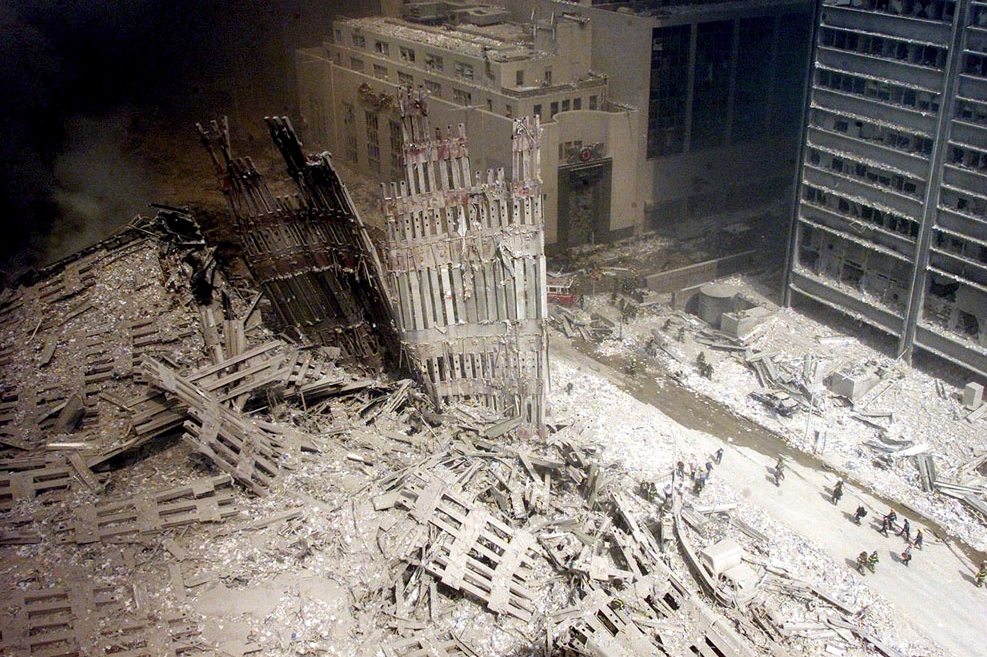 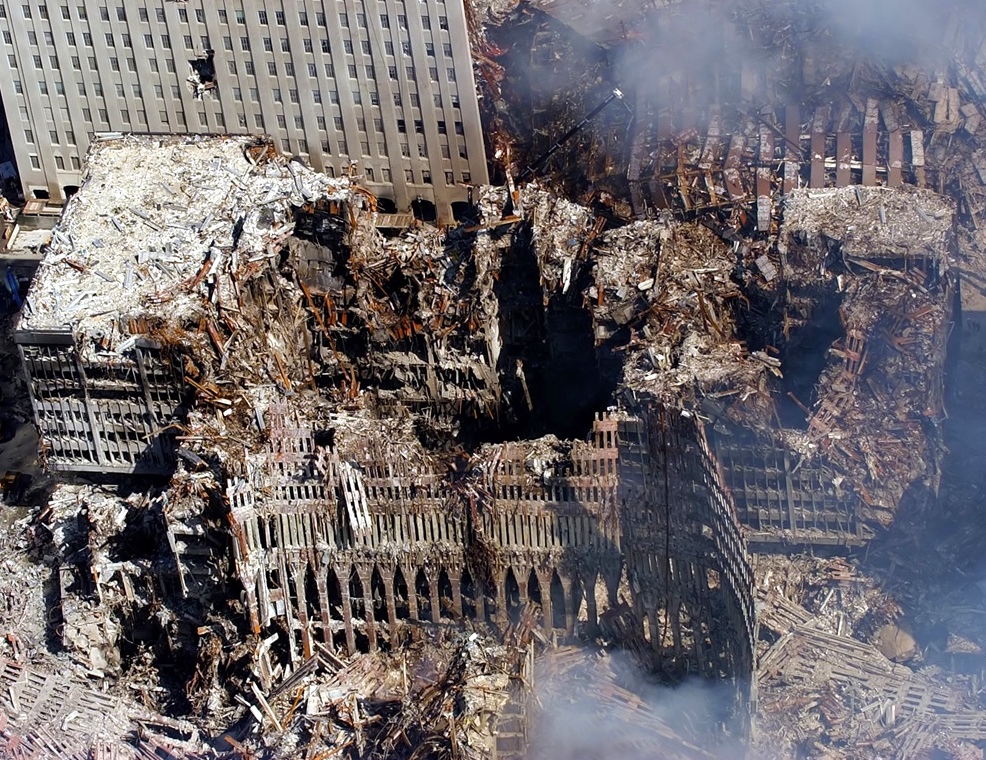 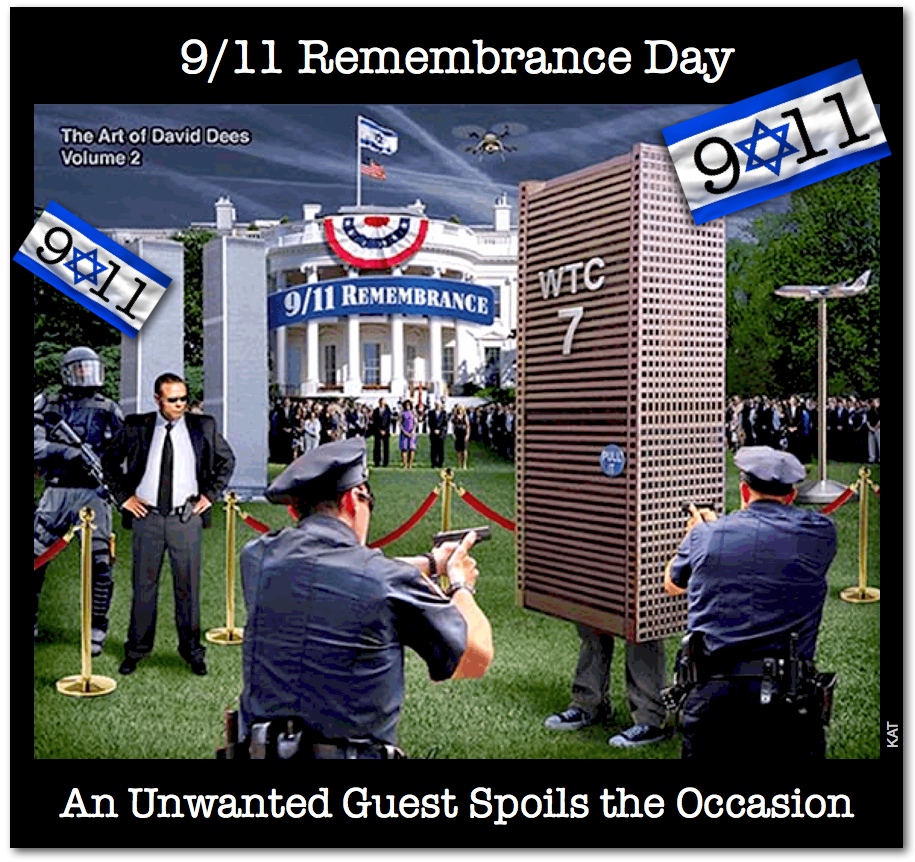 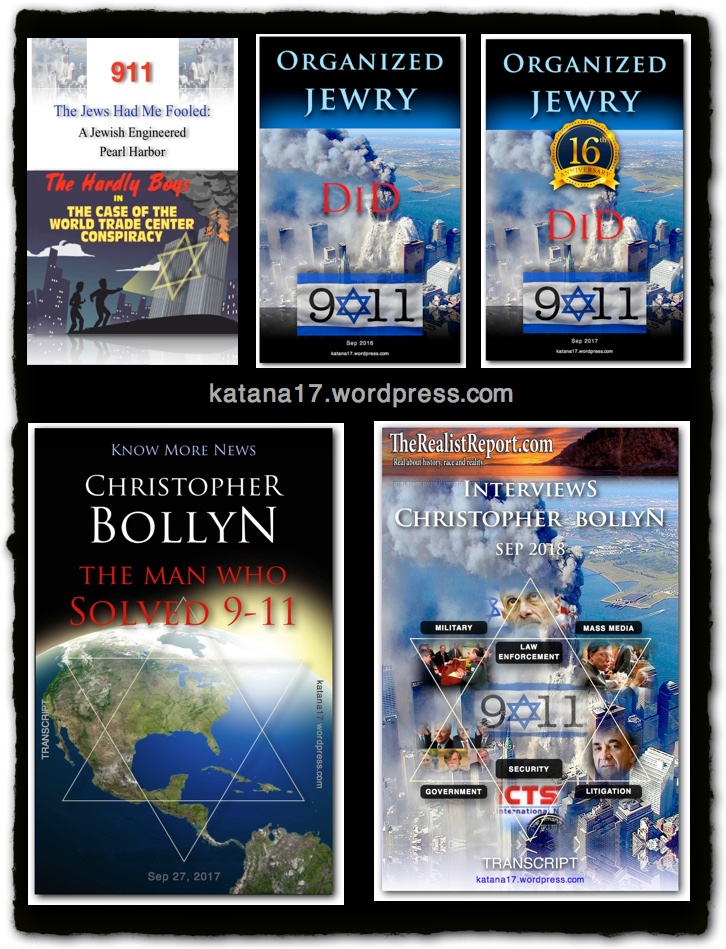 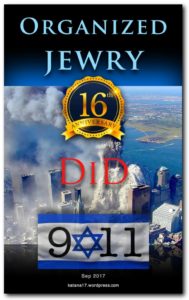