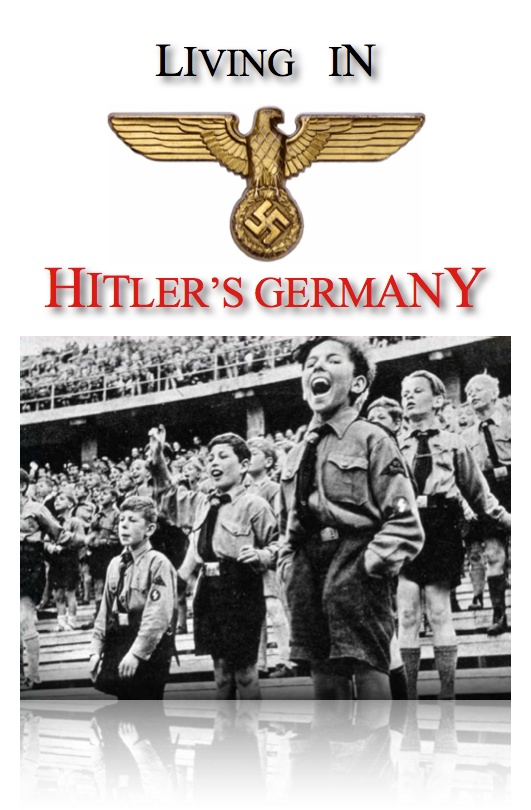 A letter from Hans Schmidt of GANPAC 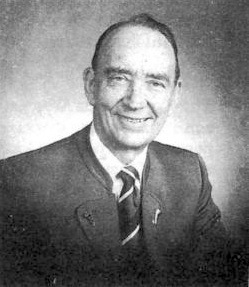 You asked for someone who had lived in Hitler’s Germany to tell what it was like. Permit me, someone who lived under the Swastika flag from 1935, when the Saar was reunited with Germany, to 1945, to give a short answer.

To be a boy or girl at that time was wonderful. In the Hitler Youth the differences between Christian denominations or the different German states didn’t count. We all truly felt that we were members of one body of people – one nation. Youth hostels were opened all over the Reich, enabling us to hike from one beautiful town to another seeing our fatherland. Every effort was made to strengthen our minds and bodies. Contrary to what is said today, we were encouraged to become free in spirit, and not to succumb to peer (or authority) pressure. In peacetime, NO military training was allowed by the Hitler Youth leadership; scouting yes. Incidentally, to “snitch on our parents” was frowned upon. 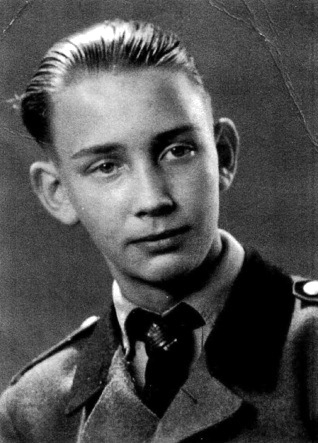 [Image] Myself, about 1942 or 1943 in the Firefighters’ Hitler Youth. This unit was organized so that we were able to assist regular fire fighters after air raids. The uniform would be a rarity today, it was made of good material of undetermined origin (possibly from French army stocks) of a brownish color with a black collar. Due to the fine manufacture of these uniforms, for which we did not have to pay, they were better suited to impress the girls than to fight British incendiary bombs. I do not know what eventually happened to mine.

At the very time when America’s allies, the Soviets, destroyed most of the Christian churches in Russia and Ukraine, about 2,500 new churches were built in Germany. NOT ONE Christian church was closed. It was the law that school and church had priority over service in the Hitler Youth. As late as the fall of 1944, the Waffen SS barracks in Breslau supplied two buses to take youth to either the nearest Catholic or Protestant church every Sunday. To be a registered member of a Christian church did not prevent advancement in the National Socialist Party.

Germany was National Socialist, but free enterprise flourished during the entire Hitler years. No company was nationalized. No small businessman was stopped from opening up his own store. I myself worked during the war for a company that can only be called part of international capitalism. If you owned shares, nobody confiscated them, like the allies did in 1945. 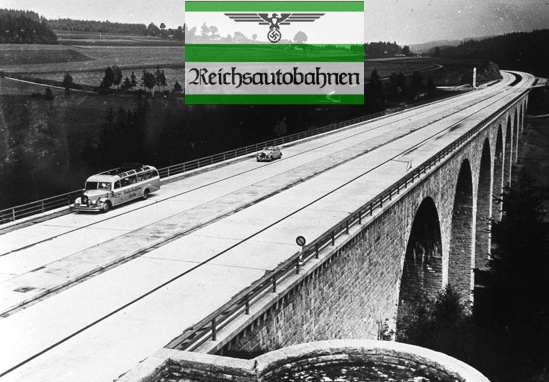 The accomplishments of the ‘Nazis’ were incredible. Starting without money and with six million unemployed (a third of the workforce), they constructed the entire German Autobahn road network in a short span of 6 years – almost without corruption – while seeing to it that the new road system did not unnecessarily destroy either the German landscape, or wildlife habitats and forests. Two years after the NS were elected to power, conditions were so improved that workers had to be hired in nearby friendly countries to help alleviate the worker’s shortage in Germany. Germany was booming while Britain, France and the US were in the depths of depression. 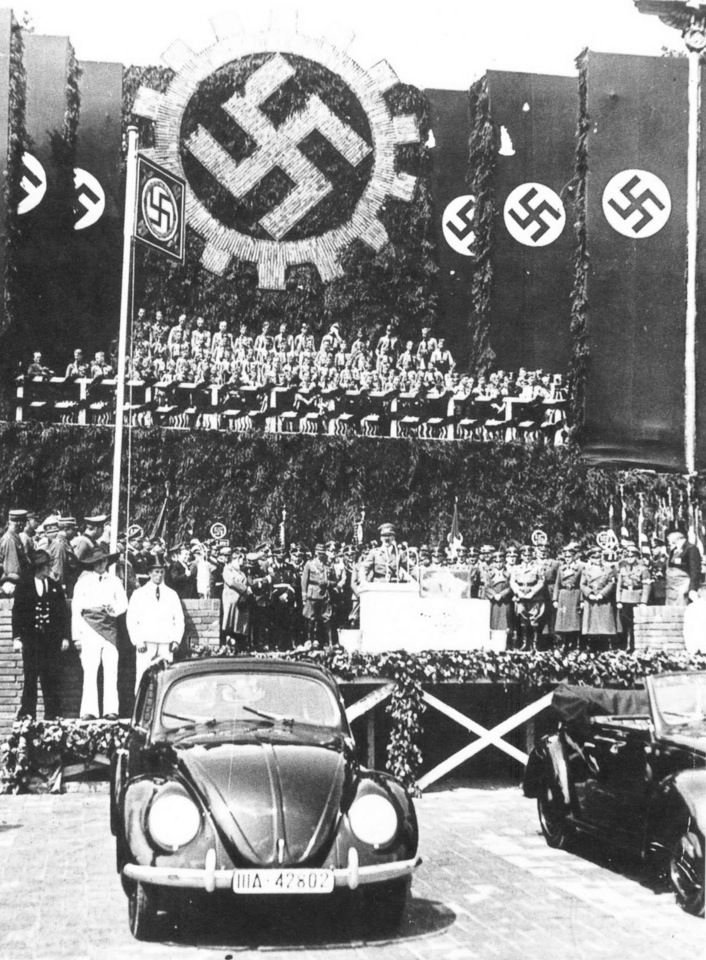 [Image] Adolf Hitler at the presentation of the Beetle

To help the workers get cheap transportation, the VW was designed and a factory was being built for their manufacture when the war started. Also, for the common people, villages of small single family homes were erected. The monthly payments were set so low that almost anyone could afford his own house. In Hitler’s Germany there were no homeless; no beggars. Crime was almost non existent because habitual criminals were in concentration camps. All this was reported in the newspapers and was known by everybody.

The German press during the Third Reich had fewer taboos than the American press today. The only taboo I can think of evolved around Hitler, and, during the war, there was a law that prohibited “defeatism”. This was because of the negative role the German press played in the German defeat of 1918.

It bears remembering that the “European Economic Community” was first coined by the Third Reich government. I remember many articles, both pro and con about this subject. One should also not forget that during the war at least seven million foreign nationals (nearly 10% of the population) worked in Germany, either as voluntary workers (Dutch, Danes, French, Poles, Ukrainians come to mind), or as forced laborers or as prisoners. I know of no instance where foreigners were attacked or molested (much less killed) because they were foreigners. Speaking of the press, I have an article from 1943 in my possession that spells out how necessary friendship is between the German and Russian peoples.

Between 1933 and 1945 there was a tremendous emphasis on culture: theatres flourished; the German movie industry produced about 100 feature films per year (of which not one was anti-American. Only 50 of them can be considered pure propaganda movies). Some the best classical recordings still extant were made in Hitler’s Germany. Actors from all over Europe, but mainly from France, Sweden and Italy were stars in German movies.

Germany always loved sports, and there was no lack of opportunities to partake in any sport one liked. The 1936 Berlin Olympics was merely a showcase of what transpired all over the Reich. In a book on these Olympics issued by the Hitler Youth that is still in my possession, Jesse Owens is shown several times and mentioned favorably. 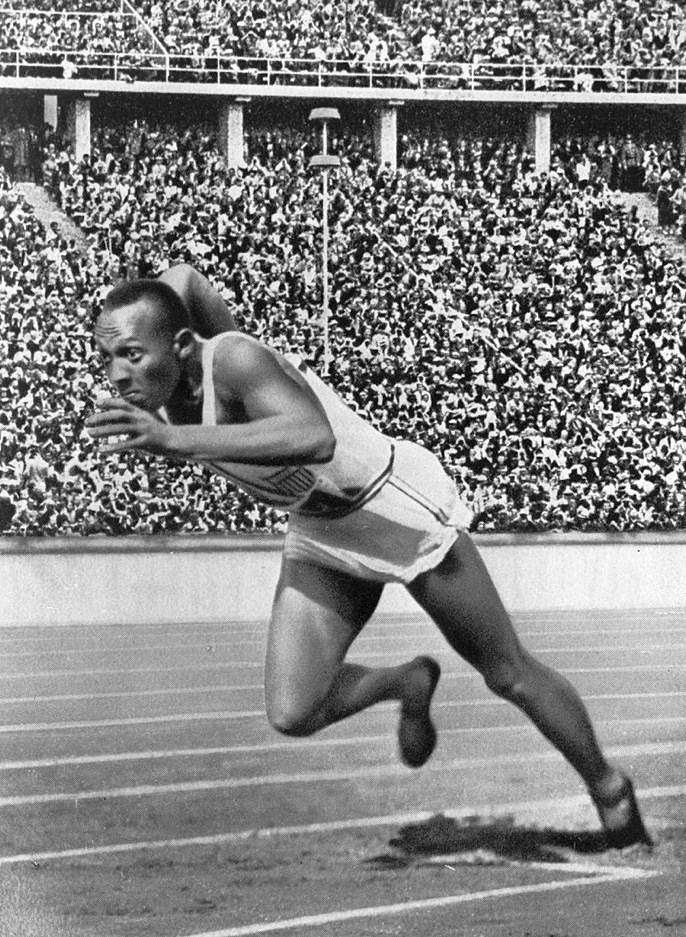 [Image] Jesse Owens at the 1936 Olympic Games in Berlin

During the Schmeling boxing fights, we kids all knew of Joe Louis, the brown bomber. Nowhere did I ever read derogatory remarks about other races. Certainly the accomplishments of Germany and the Germans were given prominence, similar to ‘the ad nauseum’ statements of today that the U.S. is the land of the free, etc. In my ten years in the Hitler Youth (actually 8, since I obviously couldn’t attend while a soldier), the Jews were never mentioned. Other sports that gripped our attention were flying (there was Hitler Youth flying training with their own sail planes), car races (British and Italian drivers dominated) and riding.

Frequently I am asked about gun control during the Hitler era. Claims are made that Hitler could take power because he disarmed the German people. That is nonsense. In Germany gun ownership was never as prevalent as it is in America. I would say that for hundreds of years one needed a gun license in order to keep a weapon. 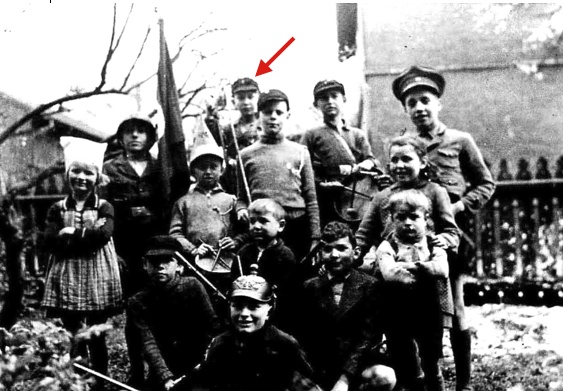 [Image] Our service in the Hitler Youth did not take all of our time, as seen from this picture of 1938. We had invited playmates form the neighborhood to play soldiers. Note the real weapons from our attic. Two guns were old flintlock rifles. One of the swords was a beautiful, hand engraved antique. All these weapons probably ended up as war booty in America. The headgear was from prior wars. Of the five boys at the top, Kurt Seiler, myself [arrowed], RolfBorschel and Erich Seiler served in the Waffen-SS. Kurt died in Hungary, Erich rose after the war to a high police rank, Rolf was unlucky enough to get caught in the French dragnet of 1947 (which I escaped) and ended up a slave worker in Lille.

On the other hand, my father owned an old pistol clandestinely (about which we children knew), and there were gun clubs all over the Reich. Furthermore, Germany was always a country with many excellent gunsmiths. It is doubtful that they could stay in business if the laws were too stringent. I would surmise that while Germany was Germany (before it was ‘liberated’ by the allies) gun ownership probably was far more widespread than is acknowledged today. Laws on the books were mainly to give the police a handle to arrest criminals with guns, not the ordinary citizen. Incidentally, just as Hitler had forbidden so-called ‘punishment exercises’ in the army (the brutal methods still employed in the American army), so had he forbidden the use of clubs by the police. He considered it demeaning to the German people.

To this day I believe that the happiness of the majority of a people is more important than the well-being of a few spoiled minorities. In school there should be emphasis on promoting the best and the intelligent, as was done in Germany during the Hitler years – a fact that contributed after the war to the rapid German reconstruction. That Hitler was loved by his people, there can be no question. Even a few week’s before the war’s end and his death, he was able to drive to the front and mingle among the combat soldiers with only minimum security. None of the soldiers had to unload their weapons before meeting with the Fuhrer (as was required when President Bush met with American soldiers during the Gulf War).

Germany under Hitler was quite different from what the media would have you believe.

[1] Hans Schmidt (April 24, 1927 – May 30, 2010) was a German and naturalized American citizen, former member of the Waffen-SS, and founder of the German-American National Political Action Committee (GAN-PAC).

Schmidt was born on April 24, 1927, in Völklingen, a town in the then League of Nations mandate of the Saar Basin between Germany and France. During the National Socialist period, he was a member of the Hitler Youth, and, by his own account, joined the Waffen SS at the age of 17, and served as a corporal in the SS Leibstandarte Adolf Hitler, originally the personal bodyguard regiment of Adolf Hitler, later a Panzer division of the Waffen-SS. Schmidt was wounded twice and participated in the Battle of the Bulge. He arrived in the United States in 1949.

In 1983, Schmidt founded the German-American National Political Action Committee (GAN-PAC), which published the GANPAC Brief in English and the USA-Bericht in German.

Schmidt is the author of several books and articles including; SS Panzergrenadier: A True Story Of World War II.

From Amazon: This is the autobiographical true story and personal narrative of the German side of WWII. The author recounts the reasons that led him to decide to join the Waffen-SS in 1943 at the age of 16. He details his service in the German Labor Service (RAD) prior to induction into and training with the W-SS in 1944. The author recounts his extensive schooling prior to posting with the Leibstandarte SS Panzer Div., and his personal experiences in combat with the unit in the Ardennes and the final battles on the Eastern Front in Hungary, ending with American captivity. HB, 20 previously unpublished photos from author’s collection. 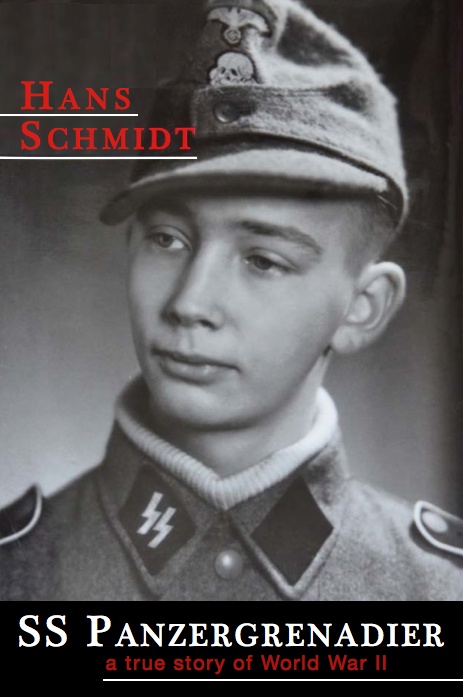 4 Responses to Living in Hitler’s Germany