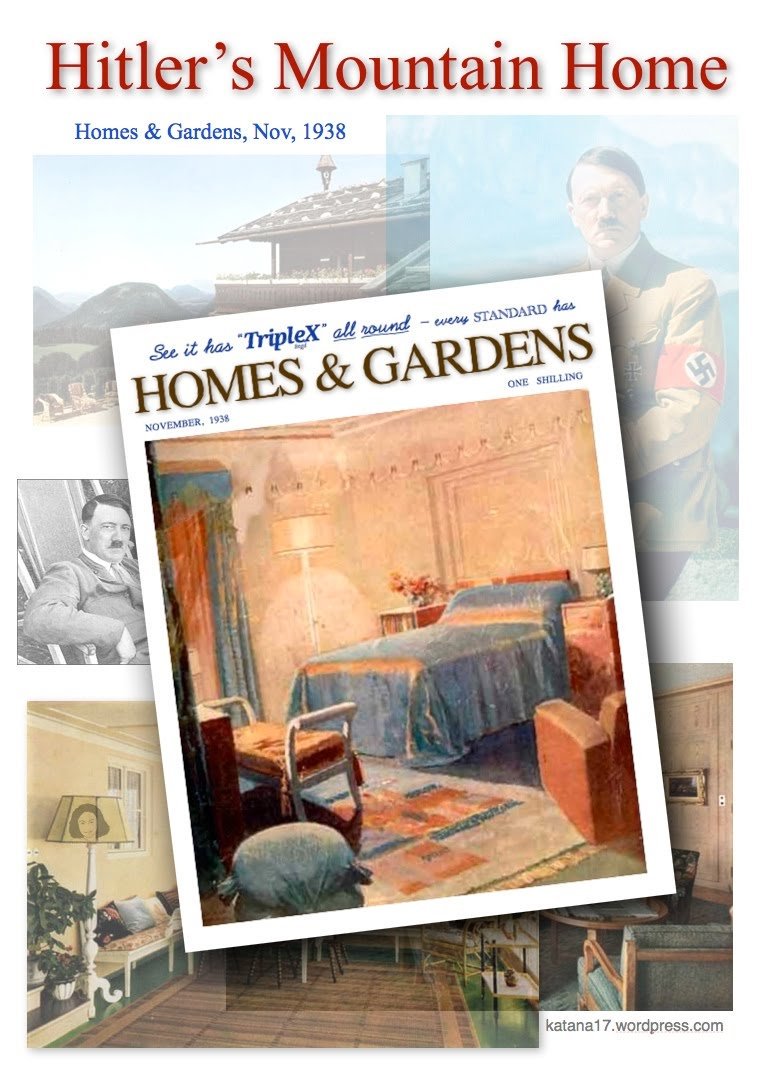 In November 1938 the English fashion magazine Homes & Gardens profiled on page 193-195 the home of Adolf Hitler. 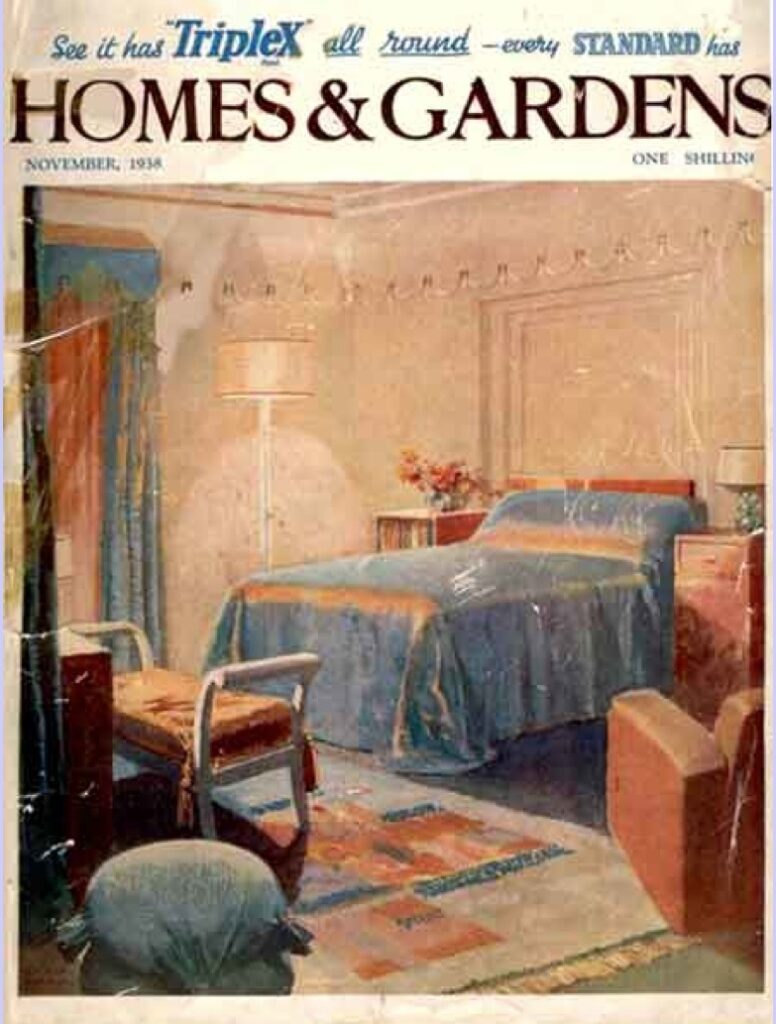 A visit to ‘Haus Wachenfeld’ in the Bavarian Alps,
written and illustrated by Ignatius Phayre 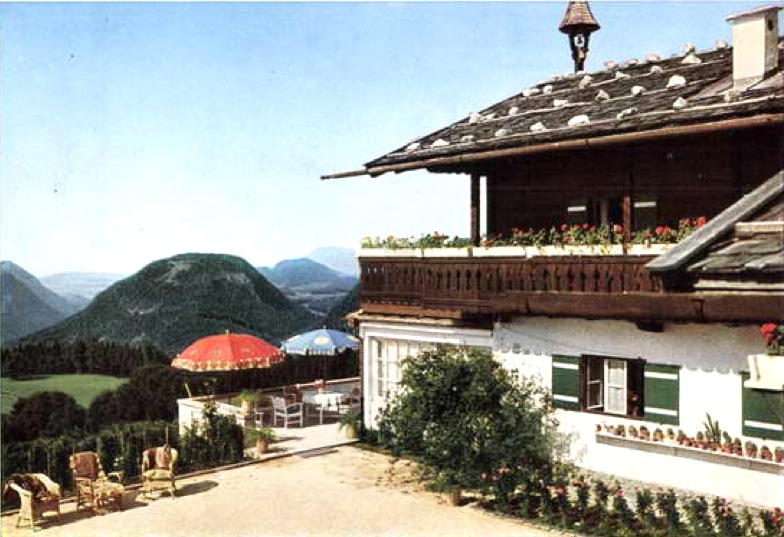 A closer view of the house, showing the umbrella-shaded terrace.

IT IS over twelve years since Herr Hitler fixed on the site of his one and only home. It had to be close to the Austrian border, hardly ten miles from Mozart’s own medieval Salzburg. At first no more than a hunter’s shack, “Haus Wachenfeld” has grown, until it is to-day quite a handsome Bavarian chalet, 2,000 feet up on the Obersalzberg amid pinewoods and cherry orchards. Here, in the early days, Hitler’s widowed sister, Frau Angela Raubal, kept house for him on a “peasant” scale. Then, as his famous book, Mein Kampf (“My Struggle”) became a best-seller of astonishing power (4,500,000 copies of it have been sold), Hitler began to think of replacing that humble shack by a house and garden of suitable scope. In this matter he has throughout been his own architect. 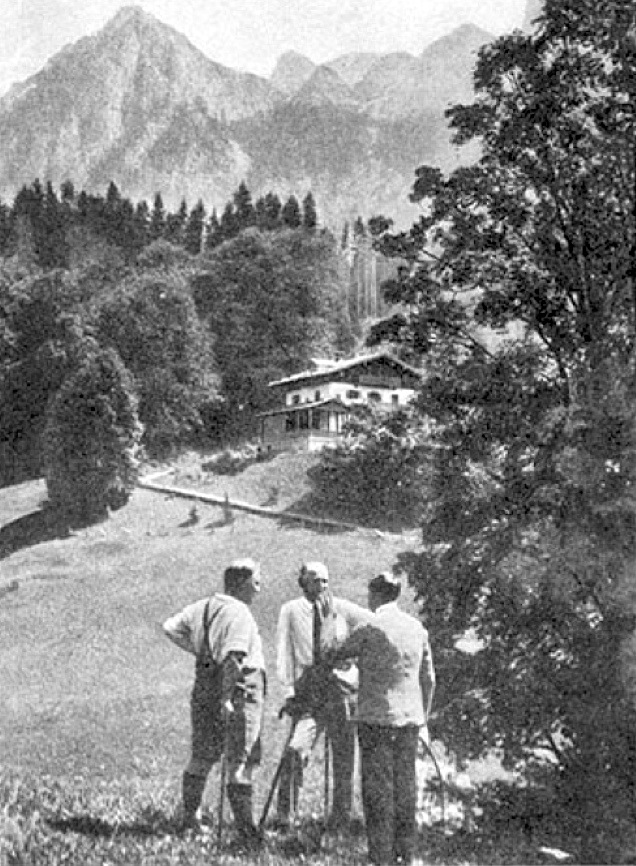 This view shows the chalet’s lovely setting. In the foreground are Hitler (back to camera) with Field-Marshals Göring (left) and von Blomberg (centre).

There is nothing pretentious about the Führer’s little estate. It is one that any merchant of Munich or Nuremberg might possess in these lovely hills.

The entrance hall is filled with a curious display of cactus plants in majolica pots. Herr Hitler’s study is fitted as a modern office, and leading out of this is a telephone exchange. From here it is possible for the Führer to invite his friends or Ministers to fly over to Berchesgarden, landing on his own aerodrome just below the chalet lawns. 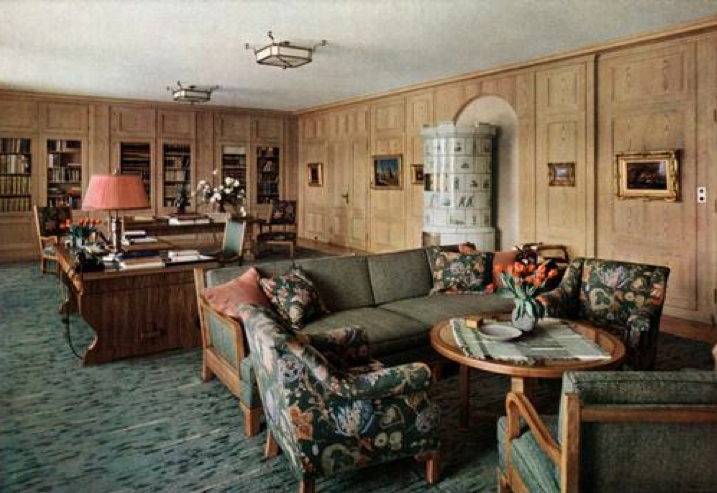 HITLER’s PINE-PANELED STUDY.
It was here, on the right, that the recent momentous interview between the Führer and Mr. Chamberlain took place.

The site commands the fairest view in all Europe. This is to say much, I know. But in these Bavarian Alps there is a peculiar softness of greenery, with snow-white cascades and forest-clad pinnacles, like the Schönfeldspitze and Teufelshörner.

Hitler’s home looks out upon his native Austria. Meals are often served on the terrace on little tables shaded by big canvas umbrellas. From this view-point a chain of drowsy lakes is seen far below, with ancient shrine-chapels hidden in ferny folds of towering rocks. And since the Reichsführer settled here as “Squire of Wachenfeld,” the whole region has been starred with motor speedways, even as far as Oberammergau.

The colour scheme throughout this bright, airy chalet is a light jade green. In outside rooms, like the sun-parlour, chairs and tables are of white plaited cane. Here Hitler will read the home and foreign papers which his own air-pilot, Hansel Baur, brings him every day from Berlin before lunch.

At this altitude the Bavarian sun is at its most genial. Even at Christmastime when deep snows are out, Haus Wachenfield basks in warmth like the Engadine’s. The effect of light and air in the house is heightened by the rolling and trilling of many Hartz mountain canaries in gilded cages which hang or stand in most of the rooms.

The curtains are of printed linen, or fine damask in the softer shades. The Führer is his own decorator, designer, and furnisher, as well as architect. He is constantly enlarging the place, building on new guest-annexes, and arranging in these his favourite antiques — chiefly German furniture of the eighteenth century, for which agents in Munich are on the look out.

It is a mistake to suppose that week-end guests are all, or even mainly, State officials. Hitler delights in the society of brilliant foreigners, especially painters, singers, and musicians. As host he is a droll raconteur; we all know how surprised were Mr. Lloyd George and his party when they accepted an invitation to Haus Wachenfield.

The guest bedrooms are hung with old engravings. But more interesting than any of these to the visitor are the Führer’s own water-colour sketches. Time was when a hungry Hitler was glad to raise a few marks by selling these little works; none measure more than about eight inches square, and each is signed “A. Hitler” — unmistakably, if also illegibly!

The gardens are laid out simply enough. Lawns at different levels are planted with flowering shrubs, as well as roses and other blooms in due season. The Führer, I may add, has a passion for cut flowers in his home, as well as for music. 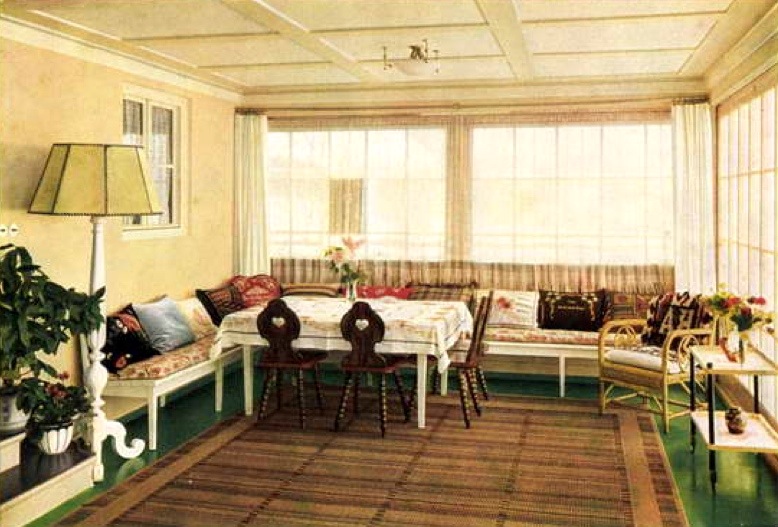 A CORNER OF THE SUN-PARLOUR OVER-LOOKING THE TERRACE.
Here Councils are held in rainy weather when it is not possible to sit outside.

Every morning at nine he goes out for a walk with his gardeners about their day’s work. These men, like the chaffeur and air-pilot, are not so much servants as local friends. A life-long vegetarian at table, Hitler’s kitchen plots are both varied and heavy in produce. Even in his meatless diet Hitler is something of a gourmet — as Sir John Simon and Mr. Anthony Eden were surprised to note when they dined with him in the Presidial Palace at Berlin. His Bavarian chef, Herr Kannenberg, contrives an imposing array of vegetarian dishes, savoury and rich, pleasing to the eye as well as to the palate, and all conforming to the dietic standards which Hitler exacts, but at Haus Wachenfeld he keeps a generous table for guests of normal tastes. Here bons viveurs like Field Marshals Göring and von Blomberg, and Joachim von Ribbentrop will forgather at dinner. Elaborate dishes like Caneton à la presse and truite saumoné à la Monseigneur will then be served, with fine wines and liqueurs of von Ribbentrop’s expert choosing. Cigars and cigarettes are duly lighted at this terrace feast — though Hitler himself never smokes, nor does he take alcohol in any form. 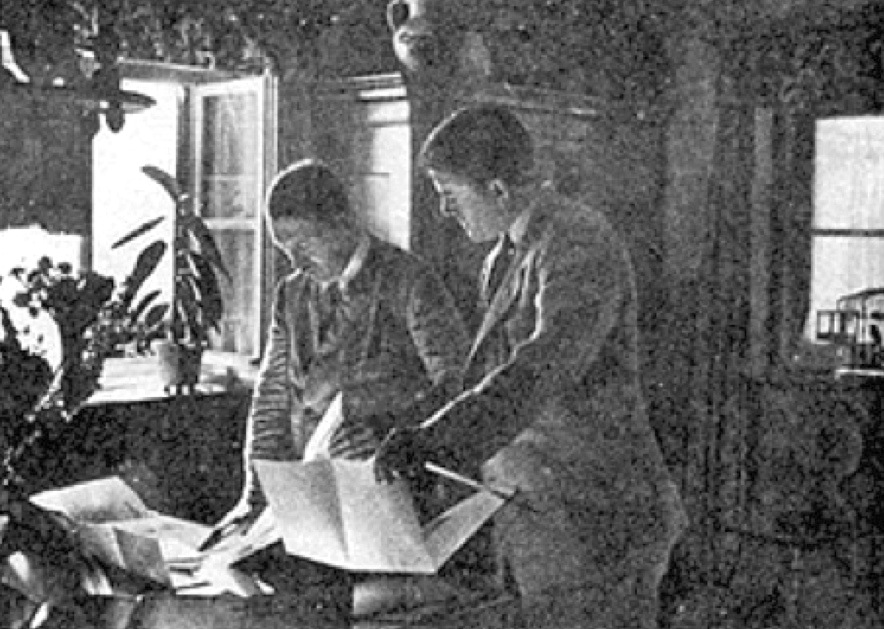 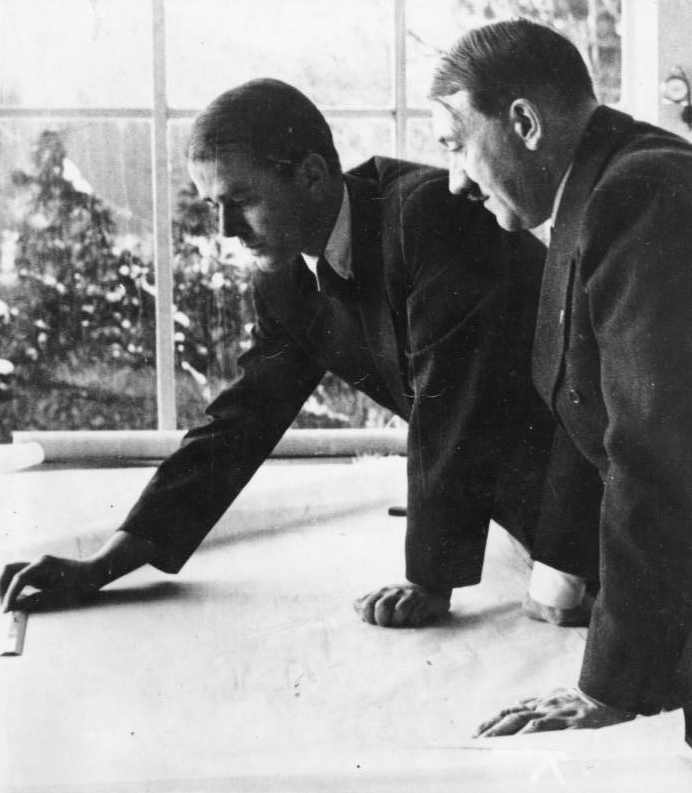 HERR HITLER SHOWS HIS BUILDER THE PLANS WHICH HE HIMSELF HAS PREPARED FOR YET ANOTHER GUEST-ANNEX TO BE BUILD ON TO THE HOUSE.

All visitors are shown their host’s model kennels, where he breeds magnificent Alsatians. Some of his pedigree pets are allowed the run of the house, especially on days when Herr Hitler gives a “Fun Fair” to the local children. On such a day, when State affairs are over, the Squire himself, attended by some of his guests, will stroll through the woods into hamlets above and below. There rustics sit at cottage doors carving trinkets and toys in wood, ivory, and bone. It is then the little ones are invited to the house. Coffee, cakes, fruits, and sweets are laid for them on trestle tables in the grassy orchards. Then Frauen Goebbels and Göring, in dainty Bavarian dress, perform dances and folk-songs, while the bolder spirits are given joy-rides in Herr Hitler’s private airplane.

Nor must I forget to mention the archery-butts at the back of the chalet. It is strange to watch the burly Field-Marshall Goring, as chief of the most formidable air force in Europe, taking a turn with the bow and arrow at straw targets of twenty-five yards range. There is as much to-do about those scarlet bulls’-eyes as though the fate of nations depended on a full score. 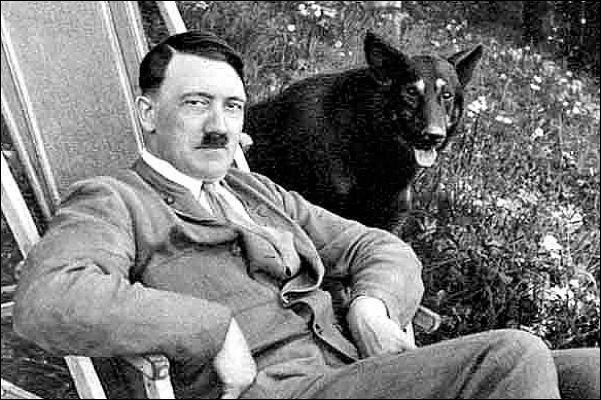 IN HIS HOURS OF EASE – THE FÜHRER IN THE GARDEN, WITH ONE OF HIS PEDIGREE ALSATIANS BESIDE HIM.

But I have said enough to convey the idea of a sunny sub-alpine home, hundreds of miles from Berlin’s uproar, and set amid an unsophisticated peasantry of carvers and hunters. This is a only home in which Hitler can laugh and take his ease — or even “conduct tours” by means of the tripod telescope which he himself operates on the terrace for his visitors. “This place is mine,” he says simply. “I built it with money that I earned.” Then he takes you into his library, where you note that quite half the books are on history, painting, architecture, and music. When it is fine enough to dine in the open air, one sees a piano made ready for the after-dinner concert. Local talent will supply violin and cello for pieces by Mozart or Brahms. But at the piano itself it is always that English-speaking giant (he is 6 ft. 4 ins.) — Dr. Ernst (“Putzi”) Hanfstaengl who presides as a composer of all-German renown.