“Is it time for our sons to rise again? 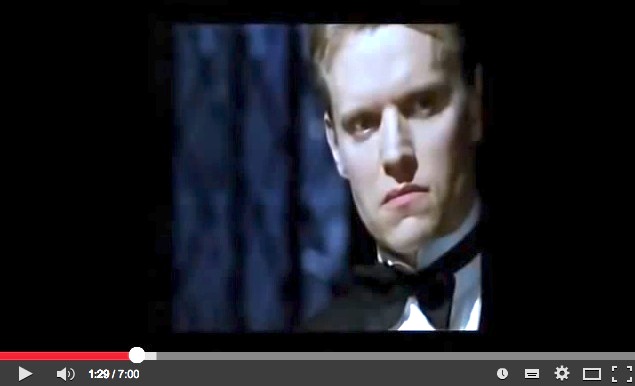 [The video is titled: Manhunt “The Speech”]

Needless to say, the class that has turned traitor on Whites is controlled by jews, being riddled with them via marriage.

Here’s the transcript of this intense speech:

My father was called George.

He was also from Bermondsey.

His father, another Bermondsey man, was called George too.

And his father, my great grandfather, … was from the same place.

He was called Edward.

These three generations of my family, … were in the fish trade.

I’m the first member of my family not to work at the market at Billingsgate.

My great grandfather had eleven brothers and sisters.

They all married, except one.

They had forty three children.

Of these, thirty seven married, … and between them they had a further one hundred and fifty nine children.

One of those was my father.

I don’t know exactly how many of his generation married or exactly, … how many children they produced.

I’ve so far tracked over two hundred of them. Many still live in Bermondsey.

Some are still in the fish trade.

There are seven called George. And five called Victoria.

I stand here, … in front of you, … as a representative of all of them.

And I ask in their name the great question, put by our patron, … Mr Powell.

What did they know of England? Who only England know?

Or. What can my family who come from England, who lived in England, … who know only England, say of this, … our country?

Mr Powell once spoke of the destruction of ancient Athens, and the miraculous survival in that blackened ruins of that city, of the sacred olive tree. The symbol of Greece, their country.

And he also spoke of us, … the English, … at the heart of a vanquished empire. Seeming to find within ourselves, like one of our own, oak trees. The sap rising from our ancient roots.

And he said, perhaps after all, … We! Who have inhabited this island fortress for an unbroken thousand years. Brought up, as he said, with the sound of English birdsong. Under the English oak. In the English meadow. Beneath the red cross of St. George. It is us!

Who know most of England.

And I appreciated him for saying that.

Because it was if he spoke for my family, who understand well their own country.

Who understand even better their own capital, London Town, as we used to call her.

As we strolled in her parks. As we marveled at her palaces. As we did business in the city, went west for a dance, … to the boat on the river.

The pale ale, and eel pie, of old London.

The London of my family, for as many generations as I know.

The London that within fifteen years will be less than fifty per cent White.

London within fifteen years, a White person will be in the minority.

Am I a racist?

Do I have anything against people of other races?

Would I prevent them from coming into my home?

So, WHAT THEN IS MY GRIPE?

My gripe, and I speak on behalf of seven men called George, and five women called Victoria!

My gripe is quite SIMPLE!

My gripe, … is that we were NEVER ASKED!

My gripe is that we were TOLD!

And EVER DAY we are TOLD, AGAIN AND AGAIN, how we are to be!

And how our country IS TO BE!

We are told by THEM!

And we know who they are. They are English too.

And now they are the class, that is GIVING England AWAY!

They have NEVER asked us!

And they NEVER will.

Do we allow them to sell our heritage? Or is time for us to speak!

To REFUSE them the right, to give away our HOLY, our BOUNTIFUL, our ONLY England that, that has nurtured us, naked, grown us as the oak!

Is it time for us that England know to come yet again and defend our country with our FIRE, our FISTS!

Is it time for our sons to rise again?