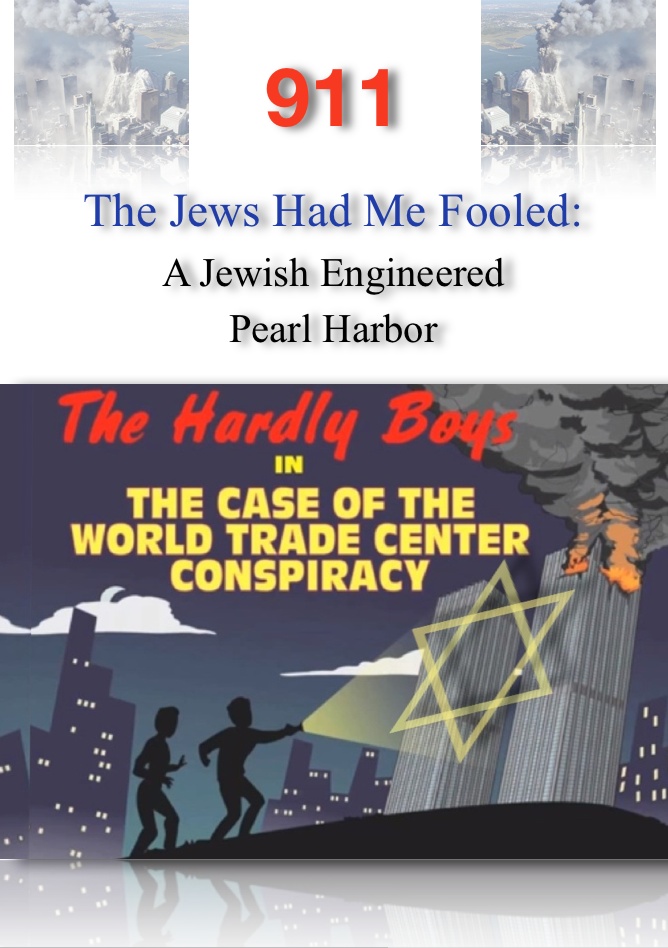 The Jews Had Me Fooled:

[NOTE: The following transcript is of an 11 minute video made by a White South African guy, where he explains how and why he has only just realized that 911 was in fact a jewish engineered false flag event.

Although it contains nothing really new for anyone already aware of that fact, it is an interesting introduction for those who are new to this, or have up to now dismissed such a view point. It should also be noted that the video does contain some minor errors that I have pointed out — KATANA.] 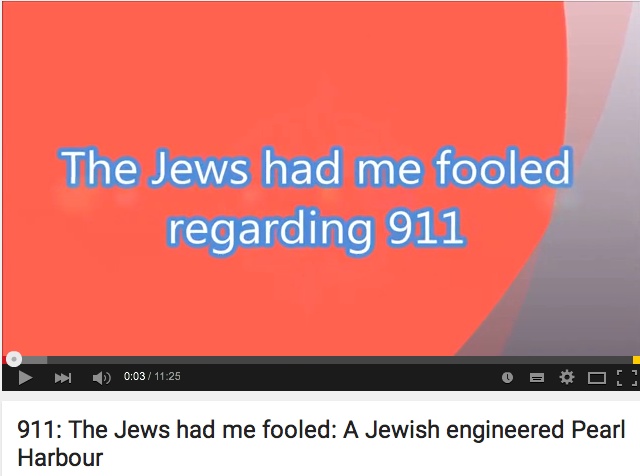 [Click on the above link, or copy into your browser to view.] 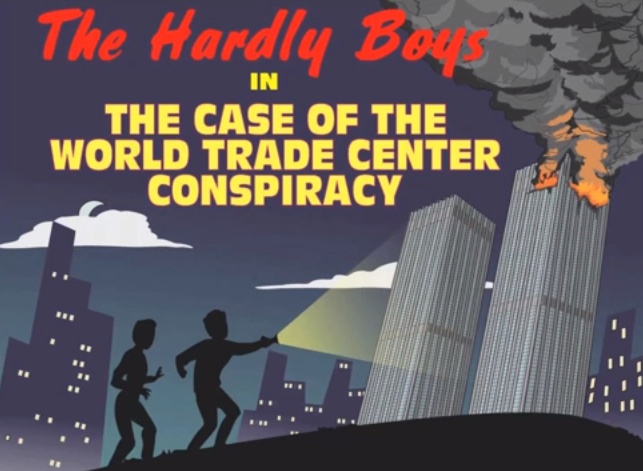 Until two weeks ago I never considered that 911 was a Jewish trick. I had heard lots of rumors about it, but I never had the time or energy to really go digging into all the different stories, because many of the stories I heard we’re highly suspicious. For example there was a woman [Judy Woods] claiming that energy beams had been used, and someone else  talking about miniature nuclear explosions. And those things seemed too far fetched for me. 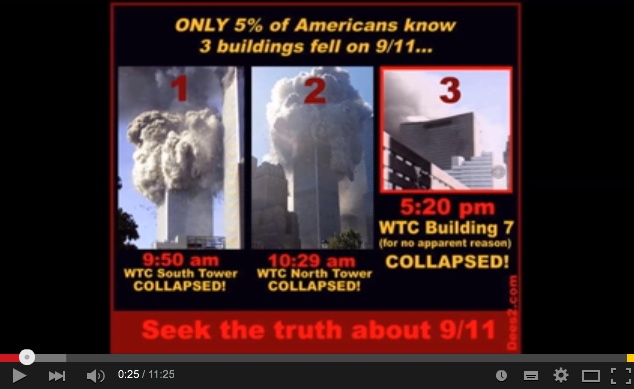 [NOTE: The following images are screenshots, NOT videos. See above for the link to the video]

And the idea of rigging explosives in the buildings, seemed insane, really. So I never even thought of those possibilities at all, until two weeks ago. What really started making me think is that I was starting to come across video footage of World Trade Center [building] 7. And I remember World Trade Center 7, though apparently most people have forgotten it. And World Trade Center 7 is the third building that fell on that day. And that building is actually big. It’s a 47 story building and that whole building just collapsed like a pack [house] of cards. I looked at that and it started bothering me. I was coming across it quite a bit on YouTube and I know that it did happen. 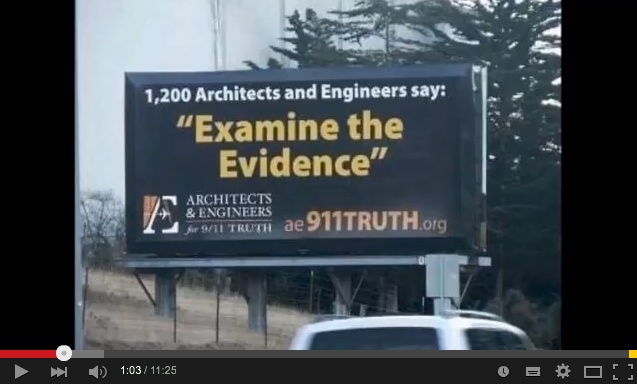 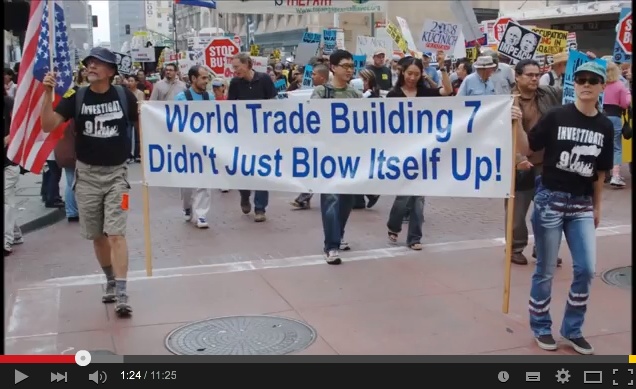 Then I began looking a bit into that. While I was browsing around just looking at World Trade Center 7. 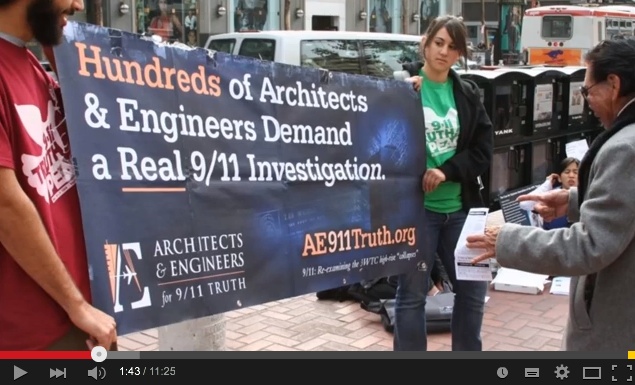 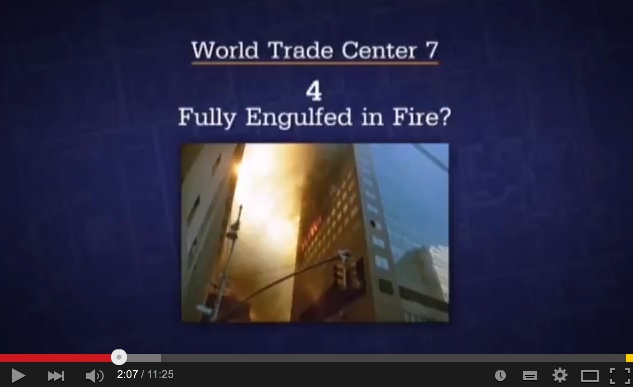 The interesting thing is, on the day of the terrorist incident he didn’t go. And they asked him, “Why didn’t you go there?” And then he came up with the story that he had to go to the dermatologist. 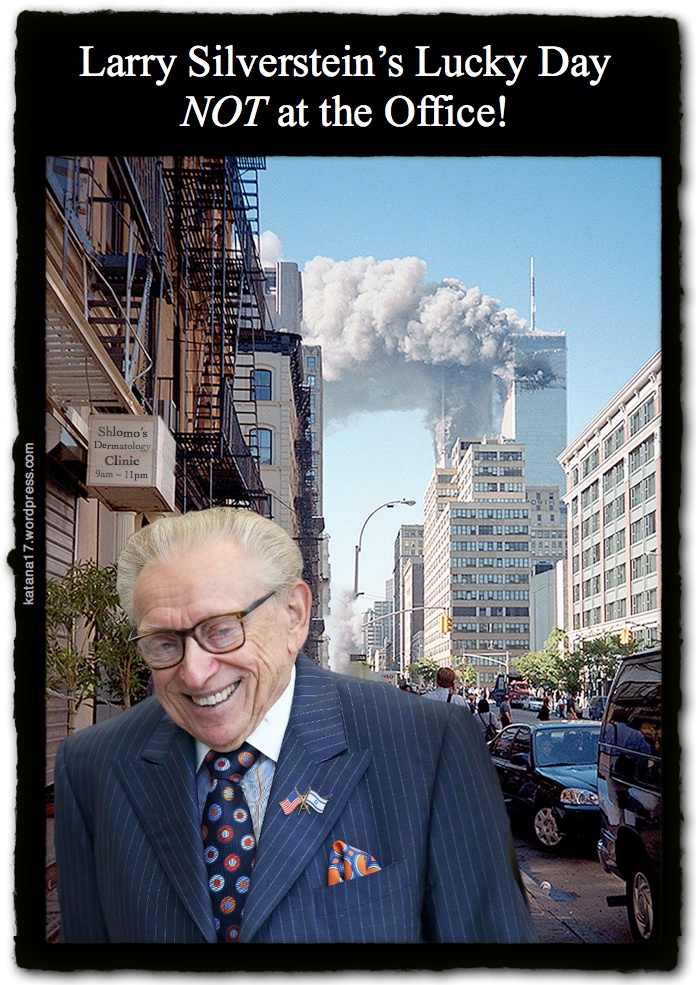 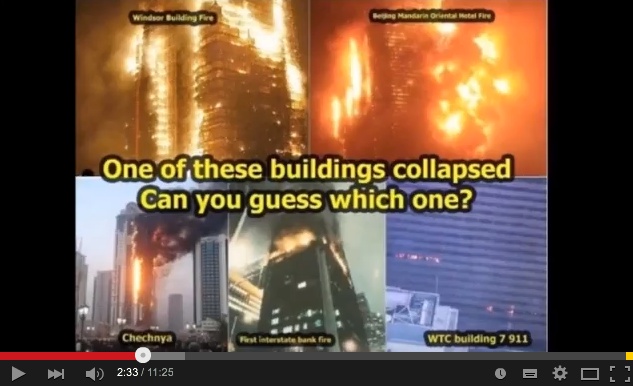 But it turns out that he has a son and a daughter who work with him as well. And they were also conveniently late for work that morning. In fact, in his whole company only four people died. What I don’t know is how big his company is. I need to go and do more digging. But there is a statement that apparently thousands of jews did not arrive for work on the day of 911. Now I need to dig more into this because this thing is a very interesting thing. The statement has been made that the jews have some kind of instant messaging, warning system. And they were told not to go to work on that day. 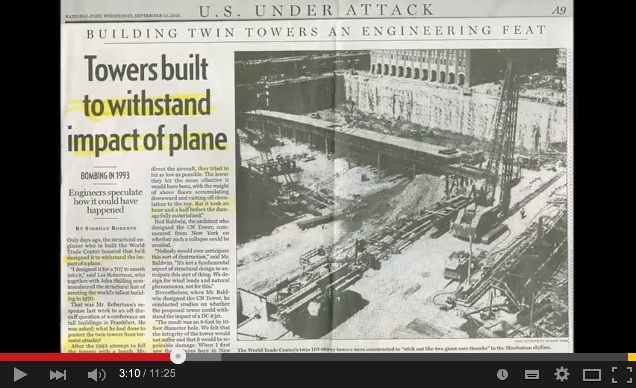 So that is something to dig into and I can’t prove that at the moment, but I know there we’re quite a lot of rumors about that which seems to have since, sort of vanished.

But the interesting thing was this jew owner. And the more you look into this jewish owner the more bizarre the whole thing becomes. 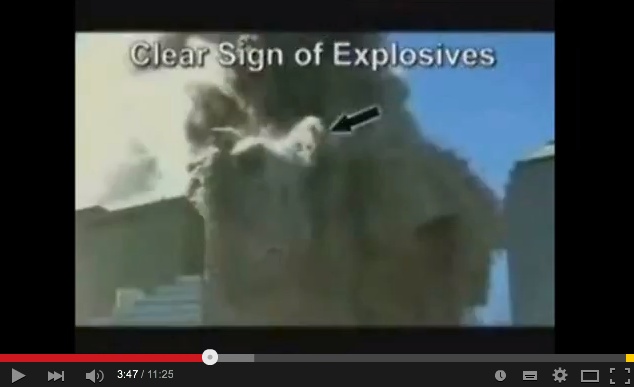 And there was even talk of destroying the building.

Did you know that the building was not even the private property of any person. 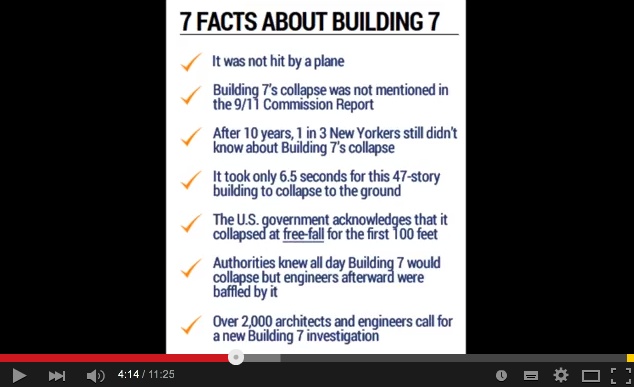 It actually belonged to the Port Authority of New York, I think it was. That jew is the first private person who has ever owned that building. Not only that, but buying the building was a bad investment because it needed certain repairs, which would have cost billions.

So he bought this building, but he had a partner as well. These two jews bought this building, and they didn’t pay for it in full, either. I think they only put down 300 million dollars. So these jews bought these buildings. Then he went and took out an insurance policy. But the insurance policy stated that the building[s] was insured against destruction, against total destruction. 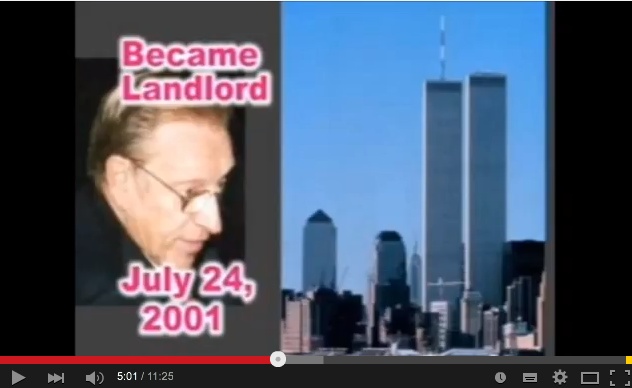 So he had this insurance policy for three and a half billion for these buildings. The wording specifically stated, “Destruction by terrorists”. Then after the event occurred he took them to court and he tried to get double the amount out because he now claimed that it was two terrorist attacks. In the end they [the jewish judge presiding over the dispute] gave him five billion instead of seven billion. 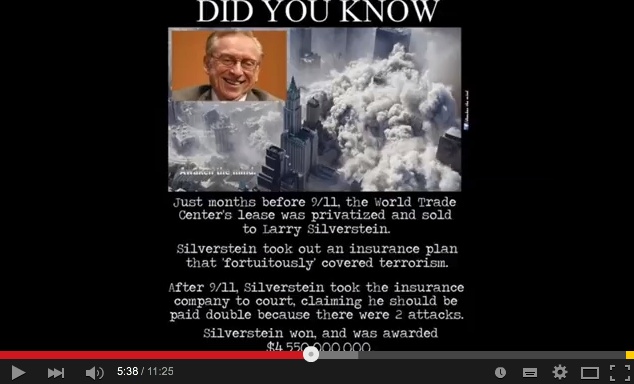 But that guy bought that building six weeks beforehand. A building that was a loss. He put down I think, only 300 million, and he walked away with 5 billion in profit. [The settlement was actually $4.55 billion. Also he still owed the Port Authority for the remainder of the sale price.] The fact that everybody lived is just bizarre. However it gets even more wacky. 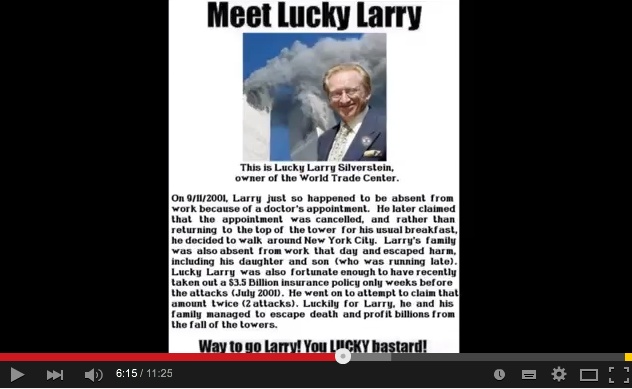 And on the documentary, he says that he was on the phone and he said to them that they must “pull the building”. Then he said, “We watched the building go down,”

Later on people confronted him about that and then he said, “No, I didn’t mean, ‘pull the building down’” blah, blah, blah. But apparently, to wire a building for destruction takes at least three weeks. So the question is, how could he just, on that day say, “Pull the building”? Because it takes three weeks to put all the necessary explosives in. And when you look at the film footage you will see that this is a controlled demolition. So why were explosives inside Building 7? Hey? How is it that explosives we’re in building 7 on the day of the World Trade Center [attack]? And he could just tell them, “OK, go ahead and pull the building”. Somebody just presses a button and the whole building just falls down. What is this about? 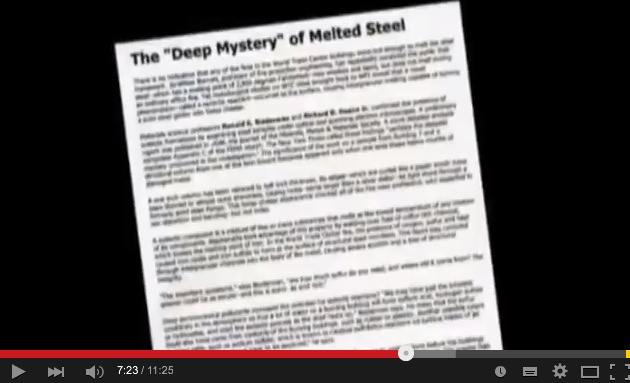 So when you start digging into the whole thing it becomes absolutely bizarre. But I will tell you the short answer for the reason for pulling the building. 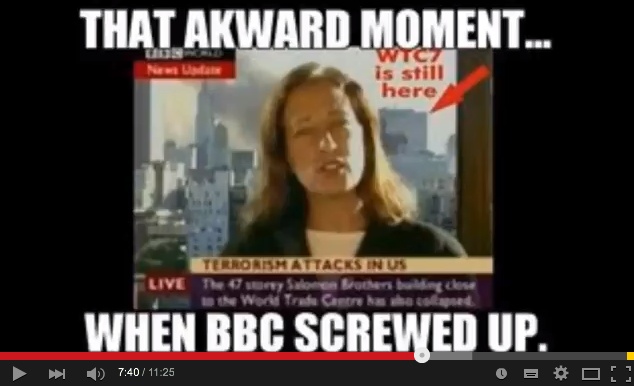 Because this is not the first act of terrorism, like this, in America. The other one is the Oklahoma City bombing. I’m convinced that the reason they pulled the building down is because there we’re things in that building that had to be destroyed. These jews have destroyed evidence before. And they have done it before by blowing up a building. They have done it a couple of times. They did it with the King David Hotel in the Middle East, they did it at Oklahoma City. 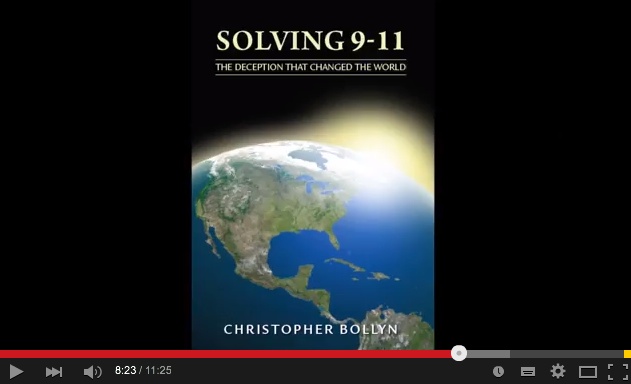 I know an old engineer who lives near me. He’s an English guy and he told me that on 911, his wife also repeated the same thing, he said that when he saw those towers fall apart like that, he said to his wife, “Buildings don’t do that!” And that is correct, because those building we’re built so strong that each floor can hold up to three to five times it’s own weight above it. Those buildings are incredibly strong, and have got incredible steel structures inside them. Those buildings cannot fall down like that. All those buildings, all those three buildings had to have been blown up! It sound insane, but that is the only way that could have happened. When the engineers and the guys start showing you pics again and taking you through it, you can actually see it. It’s absolutely astounding. I’ve been watching some of these videos and it has blown my mind. I can now see it was right there in front of your face all the time. So yes, until two weeks ago I never even considered it. Because to go and wire up all three of those buildings. Those buildings are a hundred stories high. But you know what, it’s actually easy when you own the buildings, you let anyone into the buildings. And there were lifts and things and people could have stuck explosives right throughout the building. Six weeks was long enough to do the job. So they must have hired people to go blow the whole place up.

Eh? Isn’t that insane? The engineering stuff is very interesting. There are two things that I’ve been watching. One is the engineering and the other is another guy, another journalist that did his own study. And he points out that the Pentagon was never hit by a plane. 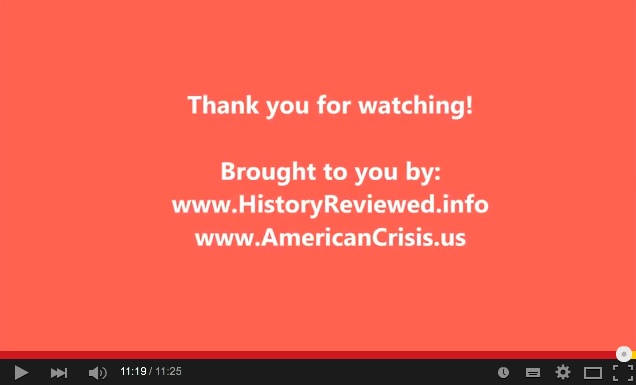 6 Responses to 911 – The Jews Had Me Fooled: A Jewish Engineered Pearl Harbor