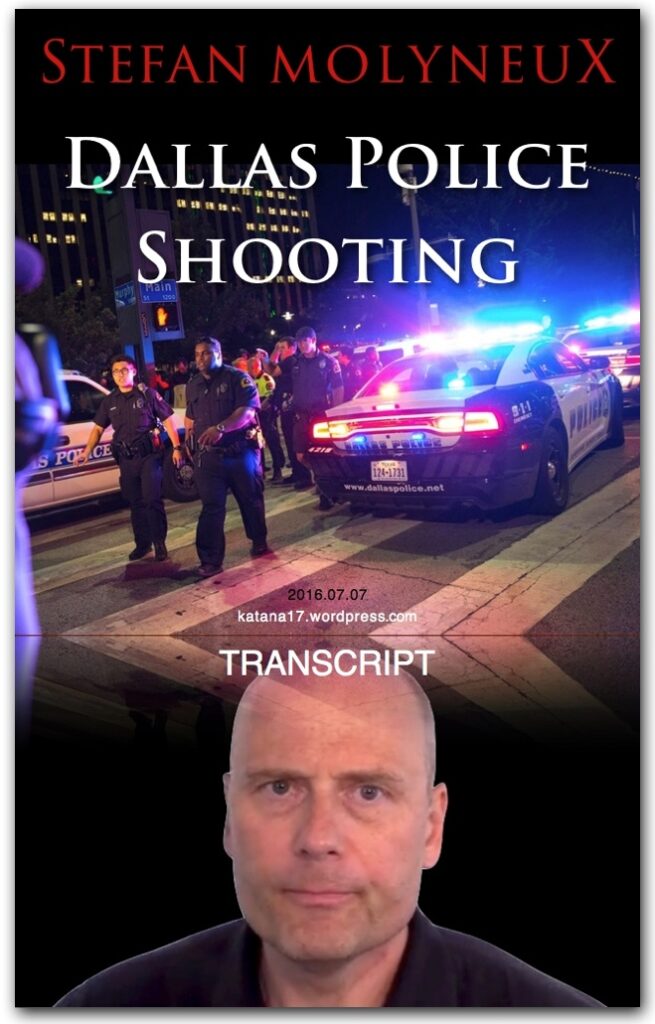 [Stefan Molyneux gives his lively (and choreographed) take on the reported deaths of five cops in Dallas by sniper fire at a Black Lives Matter protest rally. He provides plenty of damning crime stats about the overwhelmingly disproportionate amount of black crime against Whites.  He sees the event as an indirect consequence of a lack of truth in race relations, whereby we, and blacks most of all, are not told the truth about black criminality and that the lies are maintained as a way of maintaining and promoting the Democratic Party.

While Molyneux wrings his hands that the media hides the truth about black criminality and dysfunctional behavior, he himself hides, by his deliberate silence, the master role of organized jewry behind all the political parties and how it deliberately foments race conflict in order to destroy White societies.

Blacks are most certainly a problem in many White societies, but are merely a symptom of a  far greater problem, namely, organized jewry’s domination over us, the root cause of  these symptoms and many others that plague us —  KATANA.] 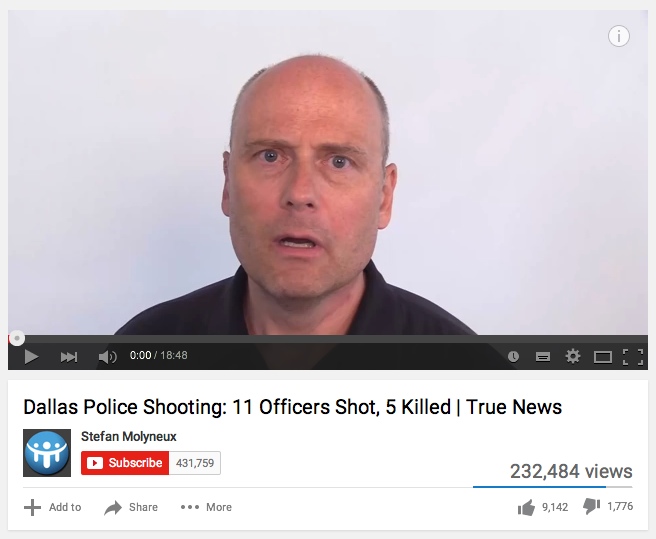 Click on the above link, or copy the link into your browser to watch the video.

During a Black Lives Matter protest in Dallas, Texas, multiple snipers shot eleven police officers, killing at least five of them and shocking an entire nation. Stefan Molyneux looks at the recent tragedy and the endless race-baiting which has inflamed racial tensions within the United States of America.

Hi everybody. This is Stephan Molyneux from Freedomain radio.

Recently in America, two black men were shot by cops and what happened, of course? Well, you see, it’s an election year and so the media whipped up as much race baiting anti-White hatred as humanly, or dare I say, inhumanly possible and the facts began to come out. One of the blacks who was shot was a convicted child molester and gun runner. The other, there are various reports floating around. Does it really matter, because it doesn’t. What matters, what really matters, is that the whole concept of, “innocent until proven guilty” has been thrown out the window!

And, President Obama commented on it, in tones and terms that we will get to in a few moments, but one of the culminations of all of this race baiting, that has been going on for many, many, years now, that the left wishes to provoke the hornets’ nest of black resentment in order to garner votes for Democratic politicians!

What happened tonight in Dallas? Downtown Dallas is currently, as we record, in a lock-down! It is reported that two snipers using, “advanced tactics, triangulation methodologies” from elevated positions have assassinated, not shot, assassinated, eleven cops!

One woman is confirmed shot. Four deaths have been confirmed. For the cops, two are in surgery and three are in critical condition, and one civilian has been injured, as well.

The police are also searching for a possible bomb. Which to me puts this somewhere in the vicinity of a massively coordinated terrorist attack, if not a downright declaration of war!

Now, some of these stories are shaky at best. At Piedmont Park in Atlanta, a black man was found hanging from a tree. What did everyone say, even though there’s not been a lynching in America for over fifty years? Lynching! He was killed by racists! They are hunting us! Well, unfortunately, or fortunately for facts, there was no discernible signs of a struggle, or foul play. The medical examiner concurred that the death was consistent with a suicide.

So basically America has been divided into two groups. Those who believe race baiting narratives and those, who, like myself, have a high flaming Berlin wall of skepticism, with regards to these stories! It’s starting to become like listening to women complaining about fraternity rapes! Yeah, maybe it happens! But boy! There’s a lot of crying wolf going on!

See, slavery, tragic, horrible! Yeah! A hundred and fifty years ago! Jim Crow, half a century ago! This stuff, these disparities are happening right now! In 2013, there were about 660,000 crimes of interracial violence involving blacks and Whites. Ah, of those 660,000 crimes, blacks were the perpetrators, 85 percent of the time! What does this mean? This means that again, as of 2013, a black person was 27 times more likely to attack a White person, than vice versa. And you see, that is, in fact, what you call racism, and victimization! It just points a bit different than what is constantly claimed.

Let’s go to New York City, 2014. What are the stats? What are the facts? A black was 31 times more likely than White to be arrested for murder.

Oh, you say, “Well you see, it’s, because the cops are so racist!” No! Because the arrest rates for minorities are consistent with the complaints of the race of the alleged perpetrator! Thirty one times more likely than White to be arrested for murder.

Now, for the crime of shooting, which is firing a bullet that hits someone, a black in New York City, in 2014, was 98.4 times more likely than a White to be arrested!

Is it all really and solely about White racism? Imagine being a cop in New York City? These numbers, these ratios, these incredibly lopsided statistics are burned into your spinal cord, into your reflexes!

Do black lives matter? Yeah, of course! All life matters.

Ah, you say, well, “But blacks get shot by cops at higher ratios than Whites!” Some truth to that. Five year study of non felony arrests in San Francisco, found that blacks were 9.6 times more likely than Whites, including Hispanics, to be charged with resisting arrest. 9.6 times more likely to be charged with resisting arrest! Is that all pure racism? Is that while we just going to shovel all of these numbers, all of these disparities, all of these problems? This big giant Belugamore [sp] of White racism is going to answer everything!? Come on!

I say this, because black lives do matter. And the way that we solve problems [whispering] is with facts!

A 2015 study of American men, that was based on the National Longitudinal Study of Adolescent Health, found that, if you control for IQ and lifetime records of violence, you completely account for all racial differences in arrest rates!

Now, these are the facts! There is a troubled, dysfunctional community producing a vastly disproportionate number of criminals who resist arrest. These are facts! If these are the behaviors of significant proportions of the black community, is it always and forever only irrational, unjust, crazy racism from outside the black community that is the ONLY cause and ONLY source of problems! ? If you say yes, you’re a racist!

Obama, weighed in from Poland. And he said:

“All Americans should be deeply troubled by the fatal shootings of Alton Stirling in Baton Rouge, Louisiana and Philando Castile in Falcon Heights, Minnesota. We’ve seen such tragedies far too many times and our hearts go out to the families and communities who have suffered such a painful loss!”

“I am constrained in commenting on the particular facts of these cases, I am encouraged that the US Department of Justice is open to civil rights investigation in Baton Rouge. And I have full confidence in their professionalism and their ability to conduct a thoughtful, thorough and fair inquiry. But regardless of the outcome of such investigation, what’s clear is that these fatal shootings are not isolated incidents. They are symptomatic of the broader challenges within our criminal justice system. The racial disparities that occur appear across the system, year after year, and the resulting lack of trust that exists between law enforcement and too many of the communities they serve.”

And this cancer of Leftist racism has been re-emerging for the past few hundred years in the West. And it is time we STARED it in the face! And called it for what it is!

“All Americans should recognize the anger, frustration and grief that so many Americans are feeling. Feelings that are being expressed in peaceful protests and vigils. Michelle and I share those feelings, rather than fall into a predictable pattern of division and political posturing, let’s reflect on what we can do better. Let’s come together as a nation and keep faith with one another in order to ensure a future, where all of our children know that their lives matter!”

Astonishing! Astonishing! No mention, of any of the problems within the black community that the black community could be empowered to solve by looking inwards and fixing things. No! It’s all the justice system. It is the justice system that drags black men out of bed, forces them to go and commit crimes and then just arrest them! All the White people do, is wake up every morning, brush, we brush our teeth, we comb our hair, and we say:

“Gosh! How can I possibly convince someone to commit a crime today?”

A day, or two ago, Hillary Clinton got smacked down by James Comey, the head of the FBI. He outed her directly, as being an outright liar to the American population, for the past fourteen months! Saying, she never sent, or received any classified emails. Saying she cared about national security. He said, she did send and receive classified e-mails and she was ridiculously careless with security. So James Comey, outed Hillary Clinton as a liar and somebody who was careless with the national defense secrets of the United States.

So what happened? Well, the Leftist media had to spark a race war to cover her tracks!

“Blacks are being hunted and killed, the cops, and aarrh!”

You know, recently in America, a black person punched a White woman in the face after screaming, “I hate White people!” The judge declared it, “Not a hate crime!” You see, because, White people are the last legitimate group that can be hated with impunity and, in fact, with applause! So, no one’s willing to tell the truth. No one’s willing to deal with the facts. And everything that goes wrong in the black community is always everyone else’s fault!

See, remember how governments are in charge of making sure everyone gets educated? How’s that working out?

Remember, how governments, fantastically in charge and just eliminating the war on drugs and making sure that everybody lives in a peaceful drug free nation? How’s that working out?

Remember how the government is supposed to make sure that the currency is stable and there’s not any booms and busts in the economy? How’s that working out?

Government is there to make sure unemployment stays low! How’s that working out?

Government is going to go create peace and stability in the Middle East! How’s that working out?

You know, what else? The government is going to make sure that everybody gets along, that we all embrace in the “Rainbow hypocrosity”!

How’s that coming along?

See, Obama came in and said:

“Hey, we’re going to solve all these race problems!”

How’s that working out?

You only get the violence, after, you tell the lies. Understand?

We, you and I, if you have the courage to speak these truths and share this information, we literally save lives by speaking the truth!

The truth doesn’t just set you free, the truth stops bullets! The truth calms rages! The truth gives people hungry for solutions, something productive and effective to do!

Of course, those who speak the truth are hated by those who profit from lies! But so what!

Being hated by the liars and the sophists, who are leading us off a cliff, is a badge of honor. A medal, if you will.

I’m willing to wear it, openly.